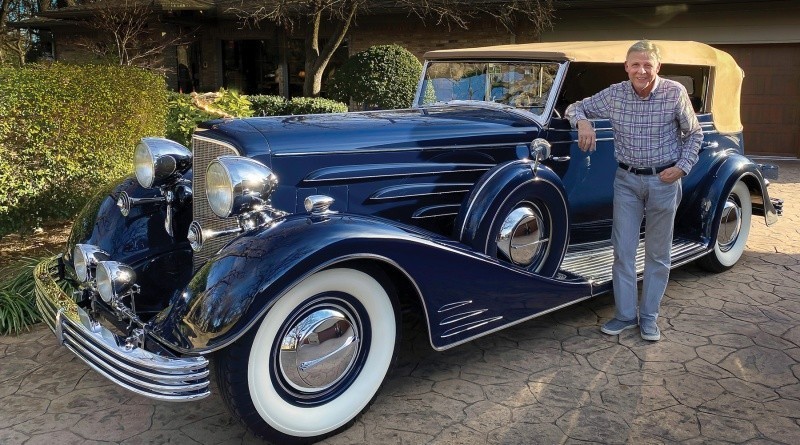 If you asked Arlington classic car collector Mike Ames in the past to say which of his amazing vehicles is his favorite, he might have responded by saying such a question was akin to asking him to pick his favorite child or grandchild.

However, he may have a different answer now that he has finally landed something he has always wanted.

“My goal has always been to acquire a 1933 Cadillac V16 because it is the grandest, most glamorous model ever produced!” Ames says. “Outrageous and subtle at the same time – nowhere on the car does the Cadillac name appear, just a modest V16 on the horn button in the middle of the steering wheel. From the massive four-bar bumpers and gold-plated hood ornament to concealed air valve stems on the wheels, a study in attention to detail and craftsmanship – a rare and wonderful experience!”

If you tend to believe that Mike’s description is a bit over the top, consider this as confirmation of his superlatives: The designer of this Great Depression Era masterpiece is one of the automotive world’s most renown – the legendary Harley Earl, the first head of design at General Motors.

In addition to his induction into the Automotive Hall of Fame in 1986, the Detroit Free Press, in a special section in 1999, ranked him the third-most-significant Michigan artist of the 20th century behind Aretha Franklin and Stevie Wonder.

So, Mike’s portrayal of the newest addition to his museum-like garage is entirely confirmed – this car is in every way a stunning work of American art.

Mike had known of this car and its owner for a long time and always admired its Pebble Beach Concours d’Elegance pedigree. He tried to exercise some restraint when it recently came up for auction.

“I got the call that it was coming onto the platform, and I informed the caller that I would not be a bidder. He called again as the auction commenced, and I repeated my decision. Then, it was sold to the highest bidder.

“Only problem was that bidder was ultimately disqualified, and I received a follow up call to say it was mine if I wanted it. Surely, I thought, this was meant to be, and a few days later the transport arrived at my home and rolled the magnificent beauty onto my driveway.”

This V16 Cadillac Series 452C All Weather Phaeton was one of only eight built in this body style and, today, one of the only three that remain. It was the most expensive model in the Cadillac line that cost an astonishing $8,000 (about $160,000 in today’s dollars) in the worst of economic times in American history. The huge car weighs in at 6,100 pounds with a 149-inch wheel base and is nearly three feet longer than today’s Escalades coming off Arlington’s GM assembly line.

“Breathtaking from every angle,” Mike confirms, “with an incredible attention to detail and quality that was unrivaled at the time.

“Note the polished, stainless steel inlay that follows the outline of the fenders and upper body. The huge engine is turbine smooth with tremendous torque, allowing one to drive in high gear at very low speeds, dramatically reducing the need to shift gears in those days before automatic transmission.

“Personally, I am a big fan of Cadillac history from its beginning in 1903. Their dominance in the luxury market was unrivaled for decades, with domestic sales typically three times of their combined rivals, Lincoln and Chrysler.”

His newly-acquired depression era masterpiece is a magnificent demonstration of the company’s determination to set the highest bar in American automobile manufacturing. Anyone who sees this V16 Phaeton will know just how that result was achieved.

Cadillac’s slogan as “The Standard of the World” was born, proven and acknowledged with Harley Earl’s artistic achievement, and Mike Ames’ forever goal has been reached.