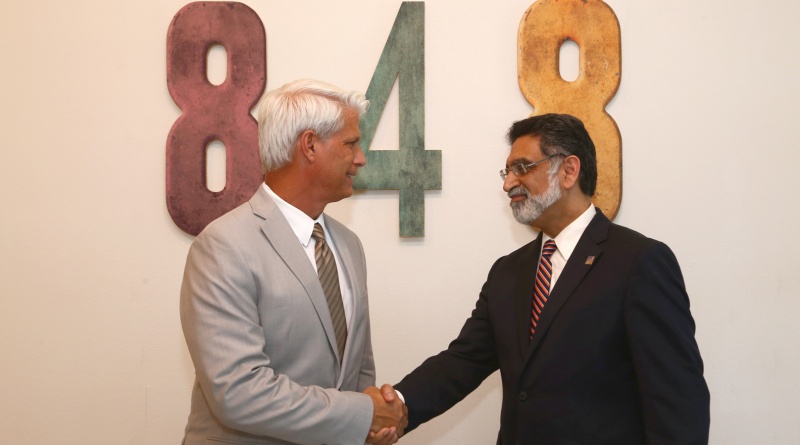 After speaking with a prominent leader in education, Brent Little realized that some college students are actually homeless. So he decided to do something about it.

A co-founder of Fountain Residential Partners, Little oversees student housing projects across the nation. He recently built developments in Houston, and in California, and currently has a project underway in Massachusetts. However, Little grew up, and lives, in Arlington. And he says he wants to work with the local community to develop a program that would help financially challenged students in his hometown.

“Then we want to take it on a national level,” he says of an initiative he calls the One Percent Challenge.

About 50 people who had gathered for a recent fund-raiser benefiting the University of Texas at Arlington’s emergency assistance fund listened as Little talked about his vision.

“We can afford one percent of our beds to dedicate to this program,” he said of the newly built, luxury, student housing complex, 848 Mitchell, and similar projects. And “we’re going to go to other apartments throughout the community and challenge them to do the same thing.”

Among the crowd was UTA president Vistasp Karbhari, who notes that while real talent is spread evenly across the city, the challenges that students face in order to grasp those opportunities are different. 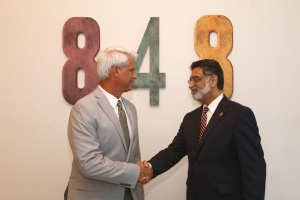 “We cannot solve the challenges ourselves,” he says. ”We need the entire community to join in with us.”

Some students may be primary caregivers, single parents, or have to choose between fixing their car or buying a book, Karbhari says, adding that a small amount of money to most people could be a huge sum to a student in a difficult situation at that time.

Other students who are trying to escape unfortunate situations would rather “stay in a corner underneath a staircase in a hallway, or in a park,” he says. “These are not hobos or vagrants. These are 4.0 students. These are going to be the leaders of tomorrow.”

Surveys show that one in six undergraduates suffers from housing insecurity, but Little says the statistics can vary from city to city. He also says the exact number of homeless students is difficult to determine because students who are sleeping in their car, or on a friend’s couch, may not identify as homeless.

“It’s not particular to climate or geography or any demographic,” he says. “It happens to everyone.”

Foster children “are a specific case, too, because they age out [of the system] at 18,” Little says. Therefore, those young adults may soon find themselves without a place to live or any support.

Caleb Lowery, 19, a UTA junior and leasing agent for 848 Mitchell, has lived in the dorms on UTA’s campus. He’ll be one of 848 Mitchell’s new residents. Lowery says he’s looking forward to living in the complex and sleeping in a queen-sized bed, but can relate to the need for the fund-raiser because he’s had to rely heavily on academic scholarships.

Since it started in 2015, UTA’s emergency assistance fund has helped more than 800 students.

“This will be an annual event,” Little says. “This is Arlington. We can do this.”