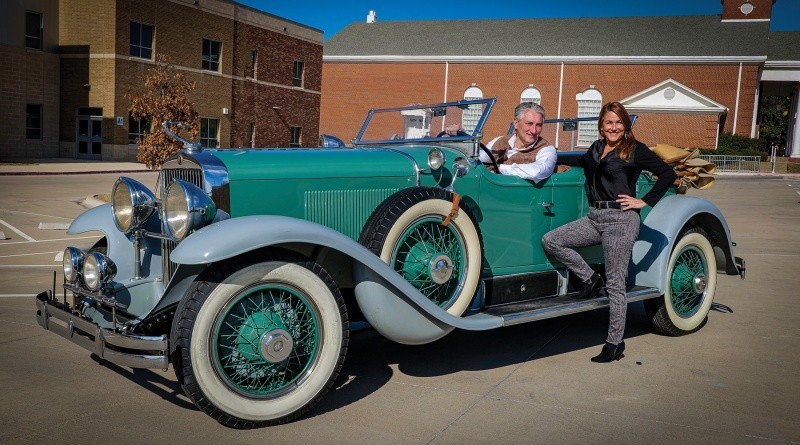 After the Japanese attack on Pearl Harbor, there was an immediate need to increase the security for President Franklin Roosevelt, especially when he was moving from place to place in a car.

It would take a while before the White House fleet could be retrofitted, so, according to CBS News, the secret service put the president into Al Capone’s 1928 Cadillac heavily armored Town Sedan for his safety.

Since Al had deteriorated greatly during his imprisonment, he didn’t need it anymore.

While the Cadillac that belongs to Lee and Rhonda Jackson is somewhat like Al’s, it is, as you can see, an open version of the 1928 V-8 Dual Cowl Phaeton.

Lee explains how he became its owner just a few months ago. It was at the annual motorsports gathering at The Quail – an exclusive showing of rare, high-end automobiles – during the event’s Bonhams auction.

“I was sitting there with my good friend Ron Sturgeon, who owns a remarkable collection of classic vehicles. He was a registered bidder at the event and had the paddle in hand in case he saw something he wanted.

“When this Cadillac appeared on the stage, I commented that it was such a beautiful car and that I really liked it. ‘Here, make a bid,’ he declared as he thrust the paddle into my hand. I said I wasn’t registered. To that he replied, ‘Okay, let’s be partners’ And with that, the car became ours.”  >>>

This car’s provenance is indeed special. It was first delivered from Detroit to Los Angeles, where it became part of the renowned Bucker Family collection at Movieworld – a supplier of automobiles to the film industry.

It appeared in movies, perhaps the most notable a Three Stooges film, “Movie Maniacs,” and an episode of The Waltons, as listed in the Internet Movie Cars Database.

After its Hollywood career, it was acquired in 1975 by LaRue C. Thomas, the well-known proprietor of the Thomas Cadillac dealership in downtown Los Angeles, as an addition to his prized collection of antique automobiles.

Several of the cars were preserved by the family after the dealership closed, including this remarkable example of Cadillac’s prominence in the early years of automotive history.

The top division in the General Motors world offered more than 30 body types for the pre-depression 1928 models as 20,000 of them were sold. Prices ranged from $4,000 for the basic sedan to more than $6,000 for the Touring Town Collapsible Cabriolet like this one. That translates to more than $85,000 in today’s dollars.

If you weren’t among the rich folks who could afford the Cadillacs, you could find a nearby Ford dealer where you could acquire one of Henry Ford’s Model A’s for about $500, less than a tenth of the cost of the fancy Cadillac. Henry sold about a million of them in 1928, so you can see how exclusive the Cadillacs were in those days.

Lee and Rhonda are really happy with their head-turning beauty. “It’s just fun for us and we plan to take it to car shows, put it in parades, and sometimes just take it out on our way to dinner,” he says.

For anyone who has been curious enough about the history of the notorious gangster, one day the Jacksons may hear someone say, “Hey, that car looks a lot like Al Capone’s that he had for protection from the pursuit of the cops or rival mobsters.”

Or, maybe not. In any event, people love to discover the art form of these classic automobiles that put our country on the road in high style.