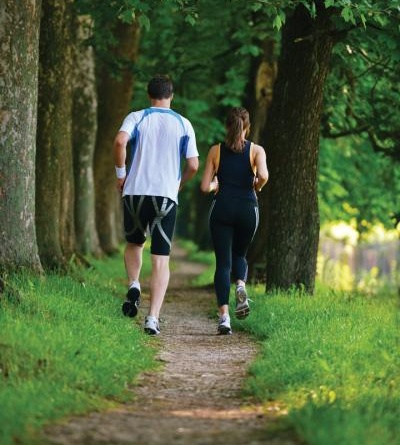 Whether you’re a serious runner

or a casual jogger, Arlington is one of the better places in North Texas to find your fitness nirvana. The city’s many parks sport many trails, all a little bit different – and all special in one way or another. Here are some of the better options:

Richard Greene Linear Park – In terms of interesting jogging/biking/in-line skating, the Richard Greene Linear Park offers not only spectacular views of the Cowboys and Rangers facilities, but also a good look at the Caelum Moor sculptures, another city treasure. It also connects to the Johnson Creek linear path system, and to Meadowbrook Park, the first park ever established in Arlington.

Veterans Park – Veterans Park contains not only plenty of picnic spots but also a fishing pond, an equestrian trail and both a Xeriscape and Wildscape garden – all great sights to take in as you take in the 1.44 mile jogging path. If you tire of jogging, you can take a break and experience one of the best 18-hole disk golf courses in Texas. Besides all that – it’s a great place to people watch.

River Legacy Parks – River Legacy Parks is an urban greenbelt oasis of more than 1,000 acres. This granddaddy of Arlington Parks features a bike trail, as well as extensive jogging trails. You’ve got not only a steady view of the Trinity River during your run, but also you’re on the migratory path of lots of birds, including whooping cranes.

A run here can be wild – sightings of bobcats, coyotes and foxes are common. From River Legacy you can also connect to the Bob Findley Linear Park and from there to the Village Creek Historical Park, which itself has a mile of jogging paths.

Marrow Bone Spring Park – This one is short in running terms (.46 miles), but it connects to the more expansive Vandergriff Park. Marrow Bone was the site of the first treaty with Indians signed by the Texas Republic (the Treaty of Birds Fort) and still has an active spring. Johnson Creek runs through the middle of it. Boulders along the pathway have scooped out places where generations of Caddos ground corn.