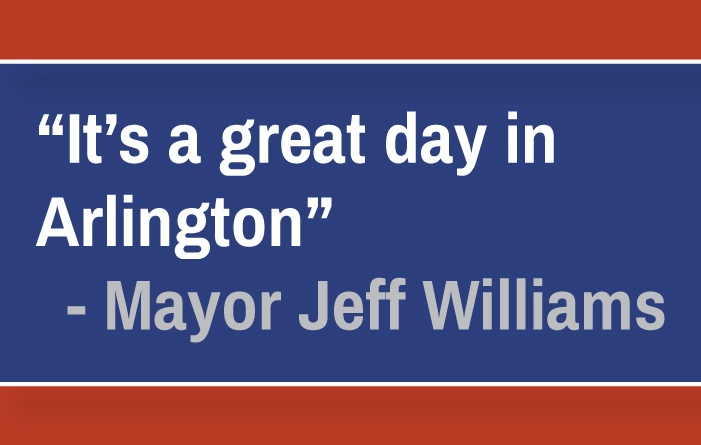 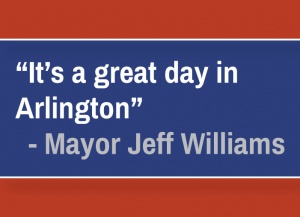 After developing sports and entertainment venues across the country, Blake Cordish, a principal in the company that has been doing this for four generations, paid Arlington a huge tribute at the opening event of Texas Live!

“We’ve entered into partnerships with many cities. But there’s something about ours here that I want you to know … Arlington has no peer.”

His compliment perfectly reflects the legacy of our city’s quintessential “can do!” spirit. For almost seven decades Arlington has pursued relationships with those who wished to invest heavily in our community.

It all began with General Motors building a post war automobile assembly plant here, then the development of a major industrial district around the nation’s first Six Flags amusement park, and then the arrival of Major League Baseball in 1972.

That set the stage for all that has followed and the burgeoning of more than $5 billion in projects currently underway across the city that can be identified by the countless numbers of construction cranes that can be seen throughout the city.

None of that would have occurred and none of what is happening right now would be happening without one essential element that has come to define Arlington’s remarkable heritage.

It requires an enlightened citizenry saying over and over that they want their town to be known for seizing opportunities to improve their quality of life.

They have recognized the value of economic growth providing ever-increasing revenue that the city uses to increase annually the level of public facilities and services to residents while, at the same time, keeping tax burdens among the lowest in the region.

The recently released city budget for the coming year reflects this reality as well as any example that could be found.

It provides for record levels of funding for police and fire protection, for street construction and repairs, for improvements to neighborhoods, and an ever-growing commitment to support the daily lives of our citizens.

All of that is taking place at the same time the budget is being achieved with the third annual reduction in the city’s tax rate.

Arlington has become used to seeing the confirmation of the city’s performance from entities evaluating how well things are going here compared to others across the country.

Here’s a few of the accolades recently received that boosted the sense of civic pride among our fellow citizens.

Because of quality city services and smart budgeting,
WalletHub.com has ranked Arlington as the best-run city in Texas and as the only Texas city to make it in the national Top 25 list.

You may be familiar with the fact that Money Magazine recently named Arlington as the Best Big City in the South, citing the median home price, average property tax, the unemployment rate and it being positioned as the entertainment capital of Texas.

Niche.com included Arlington in the top quarter of cities across the country with the lowest cost of living, based on the consumer price index and access to affordable housing using data from the U. S. Census.

This comprehensive assessment takes into account key factors, including a location’s housing, food, fuel costs, and the median tax rates to measure the overall affordability.

Smart Asset.com found Arlington to be fourth in the nation as a best city to raise a family. That ranking came after evaluating the city’s unemployment rate, rate of proficiency in math and reading, and the percentage of the population under the age of 20 – strong evidence to back that conclusion.

There are lots more like these on the list the city makes available on its website; just put “accolades and rankings” in the search box and it will take you right there with all the details.

Once you take a look at how Arlington is regarded among the nation’s great cities, you’ll know why Mr. Cordish said we have no peer when it comes to developing a partnership that produces results such as Texas Live! and all that is underway across the width and breath of the place we call home.

Mayor Jeff Williams is fond of declaring at events and occasions large and small taking place every week that, “It’s a great day in Arlington.”
Indeed, it is.