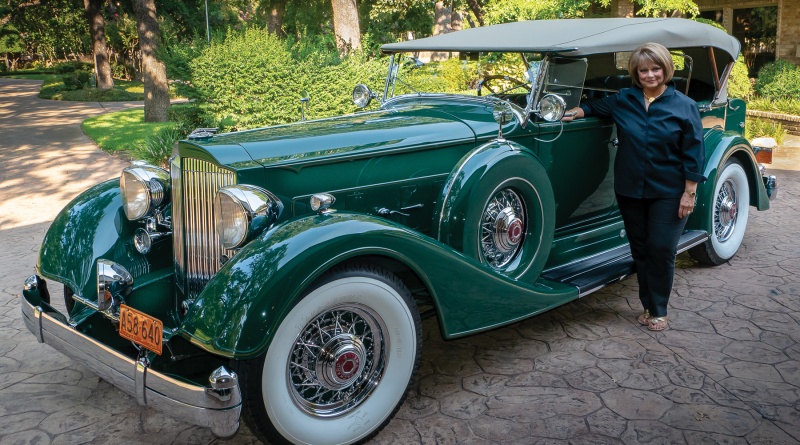 Arlington is now home to one of the most celebrated automobiles in the country, after it was recently added to the Mike and Joy Ames classic car collection.

Packard Motor Company produced just five units of this model in 1934 as part of its Twelve Phaeton series. This one is a rare survivor of the handcrafted special order vehicles available only to those who could afford a $4,500 automobile (about $85,000 in today’s dollars) in the midst of the Great Depression.

Packard’s strategy was to produce an ever-more-opulent and expensive car and capture the market of the limited number of buyers who had sufficient wealth to weather the economic collapse gripping the country.

It was a gamble that paid off for the company that had built its first motorized horseless carriage in 1899. By 1938, competing car companies, including Franklin, Marmon, Ruston, Stearns-Knight, Stutz, Duesenberg and Pierce-Arrow, had all closed.

It’s likely that many people have never heard of some of those brands. But, Packard lived on until the last true Packard was built in 1956.

So, what’s so special about this magnificent vehicle? Glad you asked – let’s take a look.

To begin with, the entire history of this car is memorialized throughout its 84 years of existence. It was sold new by Packard of Chicago to Albert Harris, a prominent local banker who is noted as being a key player in shaping the city’s history.

It would pass through the hands of seven more owners, one of whom would have his initial secured on the doors, before it found its way into the Ames’ garage last month.

Along the way, after being magnificently returned to its original color and showroom condition in 1991 by Fran Roxas, recognized as the premier restorer of classic cars in the country, it managed to collect many first-place awards, including Best in Class at the prestigious Pebble Beach Concours d’Elegance.

As a major compliment to its 100-point perfection, the car has been invited back to Pebble Beach for the 2019 extravaganza.

Giving credence to its one-of-a-kind status among all Packards, it was ordered with an array of optional accessories that include a deluxe in-dash radio, a rear Tonneau windshield, chrome wire wheels, a pilot ray steerable headlight, a feathered bail radiator cap, a correct Packard luggage rack, trunk and trunk guard.

With its body by the famous coachbuilder Brunn & Company, its 445 CID V-12 original engine delivering 160 horsepower produces the remarkably smooth sound of a sewing machine while making it among the fastest production cars on the road in 1934.

Something cherished by collectors of classics is confirmation that the frame and engine numbers are both originals and “matching.” This Packard perfectly achieves that status.

Remarkable engineering features include temperature-activated vertical louvers on the front end that automatically open and close depending on the cooling force of wind to protect the engine from overheating.

There are two separate controls on the dashboard that adjust the feel of the ride and the pressure the driver would like for the brake pedal to have when applied.

Amazingly, there are less than 21,000 original miles showing on the odometer – that works out to about 250 miles per year – a testament to the kind of care the car enjoyed throughout its several owners who obviously protected it like the work of art that it is.

One more distinction that Mike enjoys sharing is how this vehicle chauffeured President Franklin Roosevelt in the dedication parade for the Outer Drive in Chicago in 1935 – “not in a car like this one, it was this very car” that throngs of attendees to the event witnessed with the famous president waving to them from the back seat.

I asked Mike if this new addition to his collection was now his favorite. His answer came after a pause to think about it. “Well, it’s like asking me which of my children or grandchildren I like best. I won’t pick a favorite because there’s something special and unique about them all, and that’s part of the hobby Joy and I really appreciate the most.”