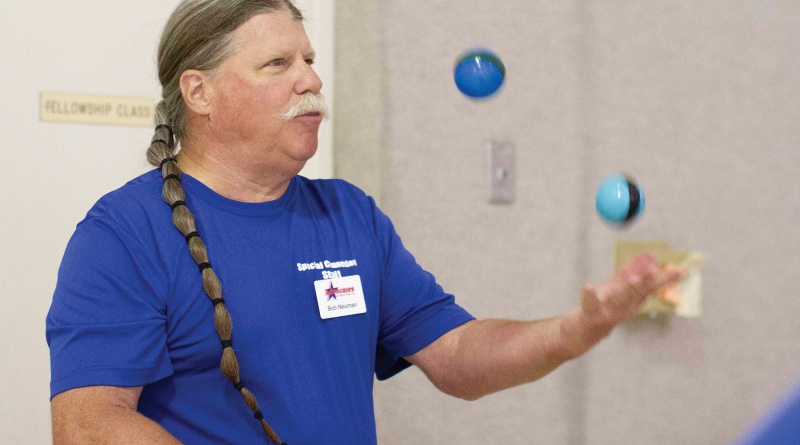 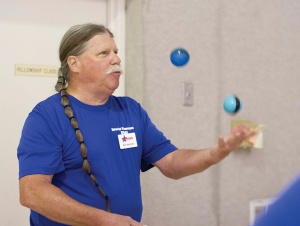 Bob Neuman had always been active. When he was younger, he ran marathons and completed triathlons. As he got older, he biked, kayaked and discovered a passion for juggling, even teaching the skill to adults with special needs.

That all ended when he got a wound on his toe that became badly infected.

“I had idiopathic neuropathy, so I didn’t notice the wound at first,” says Neuman, 67, a retired Dallas police officer who now lives in Arlington. “It went almost down to the bone. I was in a boot and off my feet for over a year.”

“I just thought I’d have to get used to having a limited lifestyle,” he says. “I used to walk two or three miles a couple of times a week, but the walking became very uncomfortable because I had to really concentrate on lifting my foot up. So I’d pretty much given up on the walking. I still worked out at the YMCA a lot, but even some of the machines were hard because I had to concentrate so much.”

Then one day, Neuman saw that Texas Health Arlington Memorial was hosting a seminar about balance. “I didn’t think it would apply to me, but I thought I’d go anyway,” he says.

Fortunately for Neuman, the seminar was led by Cheryl Till, one of only two geriatric-certified physical therapists in the Texas Health system. Afterward, Neuman asked Till if she thought she could help him.

“A lot of people think their problems are just part of the aging process,” Till says. “You can’t just treat the shoulder or the knee; you have to treat the whole patient.”

Till says older patients’ goals are often different from those of younger people, so she tries to motivate them by talking to them about what they want to achieve.

“One gentleman wanted to go on a European cruise, but you had to be able to walk five miles a day,” she recalls. “He had three months, so we broke it down into smaller goals. By the time of the trip, he was ready. “If I know what the goal is, I can almost always get them there.”

Neuman’s goal was clear: to return to the active lifestyle he had before. Till advised him to get a referral from his physician, and their work began.

“We started with high reps and low loads to give input to the muscle but not cause diminished overall function,” Till says. “I didn’t want to work him so hard that he then had to be off his feet for two days.”

They worked on strengthening his feet and ankles. To get him back to juggling, she also worked on helping him balance and move without having to look at his feet.

“I couldn’t do simple things, like drying my hair when I got out of the shower without holding onto the counter to keep from tipping over,” Neuman says. “It’s been a remarkable change.”

Till worked on the basics first. Both she and Neuman agree he had little choice in the matter.

“He still couldn’t feel his feet, so we had to train every muscle individually and then put it all together,” she says. “I had him do balance exercises with his eyes closed, and then had him do it while looking around the room instead of at his feet.”

Till says Neuman was motivated from the start, but other older patients sometimes need more encouragement. Sometimes, she says, she has to use creative techniques to get people moving.

People who are more infirm than Neuman can start slowly.

Many elderly patients are sedentary because they’re afraid of falling, so Till encourages those people to use a walker at first. “You need to move, so if you need to use a walker to feel safe, use it,” she says.

Thanks to Till, Neuman can now walk with confidence.

“I still have to concentrate, but not so much that it’s a distraction,” he says. “I have grandchildren, and I didn’t feel comfortable walking with them while also holding their hands and watching them. Now I can even carry them upstairs.”

Till has shared her knowledge with her colleagues, who use the techniques even with younger patients who have conditions considered “geriatric.”

“Some people can be 20, but after an accident and a long recuperation, their bones become frail,” she says. “Osteoporosis is considered a disease of youth that manifests itself later on. So young people today who are on their phones and playing video games instead of being active – they’re not building their bones, and they’re going to have fewer resources for bone healing if they have a fracture when they reach middle age and beyond.”

Neuman has resumed his active lifestyle, biking, kayaking and even juggling with a partner. He says his work with Till was life-changing. “I never thought I’d be able to juggle again,” he says. “I was very discouraged. I used to go to several juggling events around the country every year, and I was on the board of directors for the International Juggling Association. This was a big part of my life.”

Till’s work has made a difference not only for Neuman, but also for the 25 students who take his juggling class each week at Special Connexion 2, an adult day camp run by Advocates for Special People, a nonprofit organization in Arlington that supports parents and families with adult children who have intellectual and/or developmental disabilities.

“They really enjoy it, and it’s something they all can do,” says staff member Sandra Scott. “It really improves their focus and hand-eye coordination.”

Neuman’s only regret is not pursuing physical therapy sooner, and he has nothing but praise for Till.

“It’s just incredible,” he says. “She changed my life.”