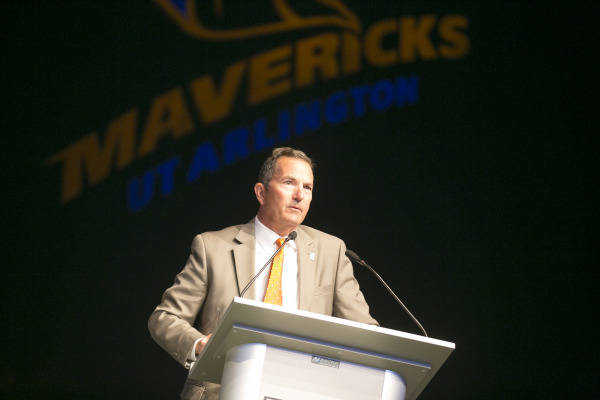 His expansive topic: Everything You Wanted to Know About the Future and Potential of UTA Athletics.

Save the date: Nov. 8 at Maverick’ Bar and Grill in downtown Arlington, 601 E. Main St., 6 p.m. to 8 p.m. Arlington on Tap is sponsored by the Arlington Historical Society and Arlington Proud, with media sponsorship by Arlington Today Magazine.

“Baker coincidentally took on his job the same day back in 2012 that the university and athletic department opened the gleaming $78 million, 7,000 seat College Park Center,” said Mark Joeckel, executive director of Arlington Proud. “Expectation were understandably high. UT-Arlington doesn’t have football, so the emphasis understandably fell on other sports including basketball and volleyball, which previously had been played on an oversize theatrical stage at Texas Hall, the latter most assuredly an exotic venue but not particularly amenable to either recruiting or collegiate athletic presence.”

What’s next for big time sports at UT-Arlington? A lot, Baker promises. Find out more at the next Arlington on Tap.