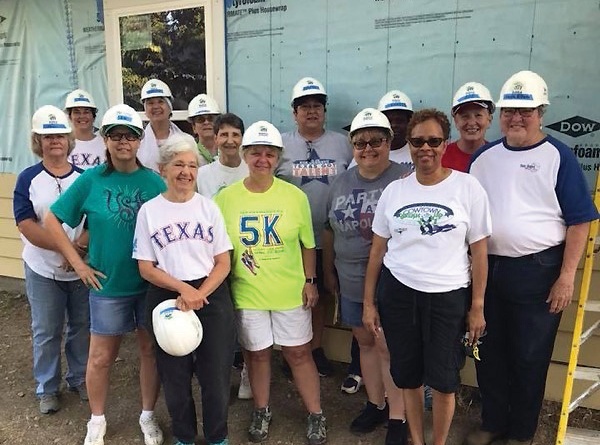 Progress has a way of being ardently bittersweet, no matter the whys of the evolution, so it goes without saying that moves from one baseball playground to another usually fall in the sentimental category. There are those who feel passionate about Globe Life Park and wouldn’t move spaces no matter what, and those who are primed for a move as long as their beloved Texas Rangers are moving with it.

The women who make up the Texas Rangers Women’s Club will quickly feel nostalgic for what is now and what will be, partly because they have for over four decades been so intertwined with this organization – linked, in fact, about as close as air and wind.

Maybe that’s a bit hyperbolic, but whenever a TRWC member speaks about the Rangers, it’s a little like she is referring to her own family.

This makes sense. TRWC is the volunteer arm of the Texas Rangers, a group with the chief objective of passing out promotional items (T-shirts, helmets, bats, mugs, that sort of thing) during some of the games. Of course, what they do goes far beyond that, and this pretty much explains why the Texas Rangers organization has changed many things over the years, but the Texas Rangers Women’s Club is not one of them.

It started over 40 years ago by then Public Relations head Phil Jason, who decided to form a group that helped out on promotion days. My theory is that it was designed as cheap (awfully cheap; it’s all volunteer) labor, but as things tend to do, it took on a life of its own.

Mary Humphus knows. She was there when Jason first discussed its origins, and is still there now, at age 89 this month, still loving the days when she is hanging out at the ballpark.

When Humphus says how “it’s been a great adventure,” she is being awfully modest. Humphus has logged 45 years with the Rangers, which is older than some sports franchises. She was there when the old Washington Senators became the Texas Rangers in 1972. She saw Billy Martin come and go, Bobby Valentine come and go, Nolan Ryan come and go, President George Bush come and go. She saw the Rangers change home turf from Turnpike Stadium to Arlington Stadium to the Ballpark in Arlington to Globe Life Park.

Compared to Humphus, a member like Beth Marshall is a newbie, having been around only 22 years.

“The idea of what we do is, basically, help out in any way we possibly can,” Marshall says of the club. “Of course we hand out the promotion items, package Junior Rangers bags, work in the Kids Zone, things like that. Besides all that, it’s Helping Hands.”

Helping Hands does pretty much what it says – helps those in need have a day of baseball, free of charge. Some days senior citizens are there, other days schools or churches or veterans or residents of Arlington Life Shelter. They get tickets and snacks (if you haven’t had a Rangers Hot Dog you don’t know what you’re missing) and, mostly, a really good time.

“It’s such a rewarding thing,” says Marshall, a past president. “Some of the people we have come to the games, no matter how old they are, have never even been to a major league game before.”

TRWC currently has about 160 members, aged 20s to 80s. They come from all walks of life. The common theme, of course, is the love of baseball, and we’re not just talking about a cursory interest.

“There’s not one lady here who in baseball trivia couldn’t beat half the guys,” Marshall says. “After we finish our jobs we are able to go into the stands and watch the games.”

As the Rangers pack up and head to the new temperature-controlled stadium for next season, TRWC will be there, too.

“We really have mixed emotions about leaving,” Humphus says.

Yet after a game last month filled with rain, cold and wind, she had a slight change in tune: “On second thought,” she says, “we might appreciate it.”