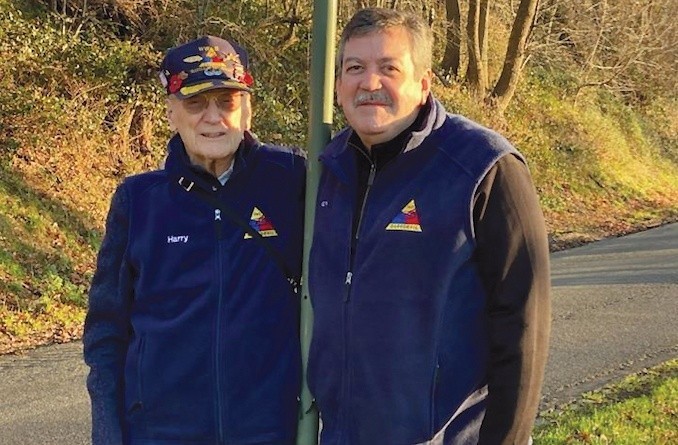 We seem to have arrived at a place where World War II veterans are often thought of as this once majestic species now dwindling close to extinction. Spotting one is cause for awe or celebration or reflection, or a fusion of all three.

I remember reading a newspaper article a few years back making the case rather explicitly how WW2 veterans were dying at 348 a day. It read like an informational piece on how to save the Atlantic Goliath Grouper.

Of course, we can’t “save” WW2 veterans. They can’t be repopulated. As great as this generation is said to have been, escaping death would be quite the Houdini act.

Mark Hatchel understands. For some time now, Hatchel, whose father, Joe, served with the 740th Tank Battalion, has filled in as a kind of reunion ringmaster, staging local gatherings in honor and remembrance of the unit’s role in WWII.

Over the years, Hatchel has led tours to Germany and Belgium, where the 740th Tank Battalion is treated like rock stars. It was a top-secret unit using searchlight tanks designed to blind the enemy at night in desert warfare. No matter how quick-footed the Infantry was, they managed to keep up and, as Hatchel puts it, “Hit anything they fired at.”

Hatchel’s first reunion of the 740th was in 1975 in Dallas, accompanying his father. “I was fascinated by what they did and who they were,” Hatchel says of the veterans.

In 1996, Hatchel joined a group of veterans heading back to Belgium and Germany. (Joe would die four years later.). Since then, Hatchel led veterans and their families back multiple times. Each trip Hatchel watched the number of veterans dwindle.

Last May, he assembled a group to Belgium, for the 75th Anniversary of the Battle of the Bulge, the last major German offensive campaign where the 740th played a pivotal role.

He’s pretty sure it will be the last trip, at least with a significant number of veterans.

“We only have a few veterans remaining, as most of them are 95 years old or older,” says Hatchel. “We have the memories, we have the books, but it’s a very different thing to get firsthand accounts of what it was really like.”

What a joy it’s been for these travelers. One of the few remaining Arlington veterans is Harry Miller. In WWII terms, he’s a young blood at 91. He was allowed to enlist in the Army at age 15, thanks to a missing birth certificate (you had to be at least 17). Miller’s mother died when he was three, his father when he was 12.

“’This happens all the time’ is what they said to me about walking in there without a birth certificate,” Miller recalls. “So I was in.”

Miller also served in the Korean and Vietnam wars before retiring and working as a safety inspector at the University of Texas at Arlington.

“My wife and I used to live for the times we got together with the gang,” Miller says. “In Belgium, they were as nice as can be. You thought I was Eisenhower the way they treated me.”

Belgium children would rush the veterans, “thanking us for their freedom and liberation. It was heartwarming how they teach their kids that kind of history.”

During one of the ceremonies, a Belgium woman walked up to Miller and asked if one of his buddies had made the trip. He had. Miller pointed him out. In tears, the woman told the man it was he who, during a curfew, bent the rules and drove her in his jeep to the hospital – where she gave birth to a son. She introduced her son – now a grown man – named after the soldier.

“There are so many stories like that,” said Hatchel, who is writing a book.

Only seven veterans from the 740th remain, “and only two of us are mobile,” Miller says. “Others are bedridden or have Alzheimer’s or something. It’s too bad to see them all gone. What great men. I served in Korea and Vietnam, but my World War II buddies were a different breed. I miss them dearly.”