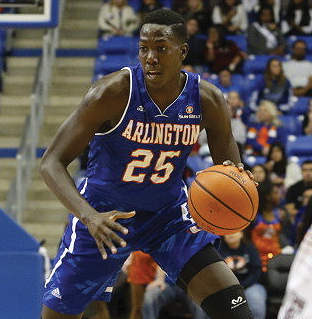 but I always feel sorry for the baseball player who hits his first home run in a long time (or ever), and the reaction from his teammates is non-existent.

He returns to the dugout to silence or a chorus of “whatever.” Eventually, the hi-jinx ends, and the player finally gets his just reward, which is high fives, handshakes and hugs.

I have never known of a scene like this to play out in basketball until I stumbled onto video of the UT-Arlington postgame reaction after the Mavs beat Memphis earlier this season.

Finally, after the last player’s hand has been slapped, they all jump up and gather in the middle of the visitors locker room for a raucous celebration.

There is chanting, hugging, hollering and dancing. The Mavs had beaten mighty Memphis on their court, and, believe it or not, this was not the only reason to cheer. Three days earlier the University of Texas Arlington had won a game in Columbus, Ohio.

Yes the Mavs have a win over Ohio State on their resume, too.

Under Coach Cross, the Mavs play an in-your-face style of basketball, where they are not afraid to press on defense or run on offense.

Consider a game in December against Bradley – the Mavs’ press forced the Braves into 24 turnovers. The team scored 36 points off the turnovers. On the same evening, UT-Arlington broke the single-game record for 3-point field goals with 17.

So as the post-holiday blues set in, do yourself a favor and find your way to the College Park Center. The Mavs’ beautiful arena provides a real home court advantage. UT-Arlington has won 84 of its last 117 home games.

Ten of the 15 players on the roster are from Texas. Maybe that is why they get along so well. The truth is, chemistry is one of the more elusive things in sports, and this team has it. The team took a preseason trip to Vancouver and spent a week in the Bahamas together last summer.

Coach Cross noticed something on those trips:

“You could just see that they liked each other off the court, and I think you’re seeing that on the court.” None of this early season success guarantees that they will make it to the “Big Dance,” but the Mavs have a real shot at winning the Sun Belt Conference and getting an automatic bid to the NCAA Tournament aka “March Madness.”

If they do make it, I can already picture the celebration; it will look a lot like the one after they beat Memphis.