The voice of Arlington sports

by ArlingtonToday Magazine
in Featured, People
0 0
0

As someone who’s spent most of his life around sporting events and scoreboards, John Nelson has achieved an impressive number of his own. 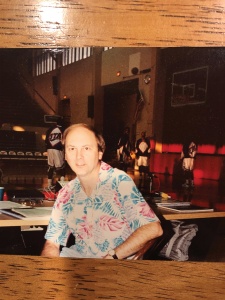 “I’ve covered 21 sports,” says Nelson, who has been a fixture at Arlington ISD and University of Texas at Arlington athletic events for decades. “I’ve been kind of lucky to be at broadcast outlets that let you cover different sports.”

His expertise extends past just games. Among his interview subjects have been a sitting U.S. president and one of the greatest boxers of all time, Muhammad Ali.

His contributions to the community resulted in his induction in May into the Arlington Athletics Hall of Honor, which recognizes the city’s athletes, coaches and other prominent sports figures. For the past 18 years, he’s anchored the television coverage of Arlington’s annual Independence Day Parade, one of the largest in the country.

The Arlington native graduated from Arlington High and has spent nearly his entire broadcasting career in North Texas, a rarity in a nomadic industry.

“He’s obviously really good at what he does. He cares for the athletes that he covers,” says Jim Staples, a Pantego resident who has partnered on-air with Nelson for 35 years.

While a student working for the campus radio station at the University of North Texas, Nelson interviewed Muhammad Ali, who was attending a protest rally on the campus. Later, while covering the PGA Tour’s Byron Nelson tournament pro-am for CBS Radio, Nelson interviewed President Gerald Ford about the Arab oil embargo.

Nelson served as the radio voice of the Fort Worth Cats for five years, calling their 2005 championship on the radio and their 2007 title-clincher for TV. During his time with the baseball team, he interviewed former major-league stars such as Duke Snider, Sparky Anderson and Maury Wills as they made publicity appearances at LaGrave Field.

Even while covering famous athletes, Nelson always held a special place for high school sports, which he continues to call. Since the mid-1980s, he has broadcast Arlington ISD football and basketball games on the local cable affiliate.

“There’s nothing like when September rolls around” and the high-schoolers take the field, says Nelson, who likely is now calling games involving the sons of players whom he previously saw compete.

He served as the radio voice for UT-Arlington basketball, estimating that between the AISD and UTA, he’s called about 500 football games and 1,000 basketball contests.

His knowledge and passion are obvious to listeners, says Staples, his longtime friend.

“He remembers people, and he remembers their names,” Staples says. “He’s so well-prepared. He taught me a lot about preparation.”

That skill comes from decades around sports. He played golf and baseball in high school, his father and grandfather were instrumental in forming the Arlington Optimist Little League and his mother was a high school golfer in Oklahoma.

One of his college instructors, broadcasting legend Bill Mercer, helped Nelson land a job at a Fort Worth radio station (KXOL), where Nelson worked afternoons and evenings after attending classes in the morning. From there, he worked a variety of radio and TV posts, including brief stints in Temple and Waco before returning to his North Texas roots and sports.

“Sports is drama without a script,” Nelson says. “You see something different at every event and you can share it across generations.”