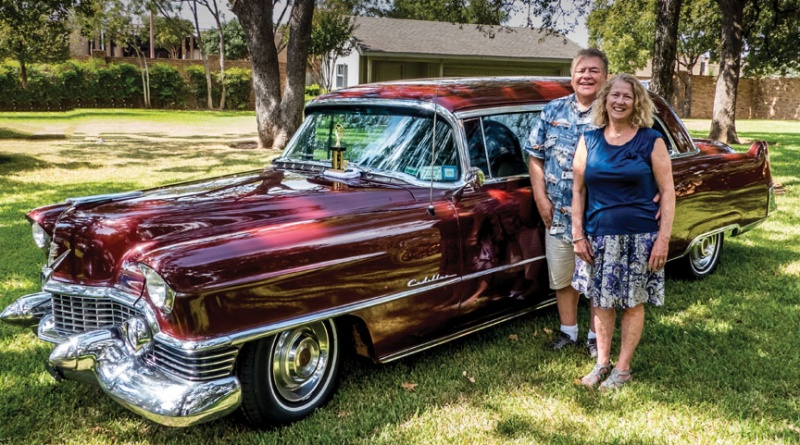 A popular Christmastime children’s song celebrates traveling “Over the river and through the woods to grandmother’s house we go; the horse knows the way to carry the sleigh, through white and drifted snow!”

When the song was originally published in 1844, it actually was about a trip to grandfather’s house to celebrate Thanksgiving – so now you know the answer to a trivia question that nobody will probably ever ask you.

Today, if you happen to be a member of the Albert and Debra Mahanna family, as many as nine of you could make the same scenic trip in their 1954 Russet Red Landmark Fleetwood Edition Cadillac Series 75 Limousine.

And, you could do so in the warm comfort of Bedford Cord Upholstered seats instead of being exposed to all that wind and snow on the way to Grandma’s.

While it doesn’t actually qualify for the exact definition of “limousine” due to the lack of an optional roll up window between the passenger compartment and the driver, it served as one when this very car toured successive Consulate Generals of France around New York in the mid-1950s.

Its most recent distinction was winning the trophy perched in front of the windshield (in the picture on the preceding page) in a recent Arlington classic car show.

The Mahannas collectively became only the third owner of one of just 50 of these special, limited editions that Cadillac built. With a little over 34,000 actual miles, everything except the tires on this exceptional vehicle is original.

Just to be sure, even that, too, is included when showing off the car – the spare tire in the trunk is the one that came with it off the show room floor 62 years ago.

Under the hood of the expansive four-door sedan is an eight-cylinder, 331-cubic- inch, 230-horse power engine necessary to move the two-and- a-half- ton behemoth down the road.

The car’s prodigious passenger capacity came from two jump seats that, as a result of the extended wheelbase, provided plenty of back seat room and a high-headroom, taller passenger compartment.

Round jet-style dual exhaust outlets were incorporated into the vertical bumper extensions, and the rear bumper was entirely redesigned.

A wide ventilator intake was stretched across the base of the windshield, and a chrome visored headlamp look was emphasized. V-Shaped ornaments appeared on the hood and deck lid with Fleetwood script, leaving no doubt that the owner was driving the premier version of the luxury brand.

While Cadillac’s iconic Flying Goddess hood mascot had taken many forms over its history, the one in ’54 advanced the low-profile, streamlined abstract look without detail in her wings or feathers.

In 1954, these cars sold for just under $6,000 – almost three times the price of GM’s Buick Special that year. According to the big classic car insurer, Hagerty, one like the Mahanna’s would cost you about five times more than that today, if you could find one. Hagerty’s website says, as far as they know, none are listed for sale anywhere

So, if you want to take your group of nine to Grandma’s for Christmas in one of these, you will need to get in contact with Albert or Debra. Unfortunately, I seem to have misplaced their phone number so, good luck with that.