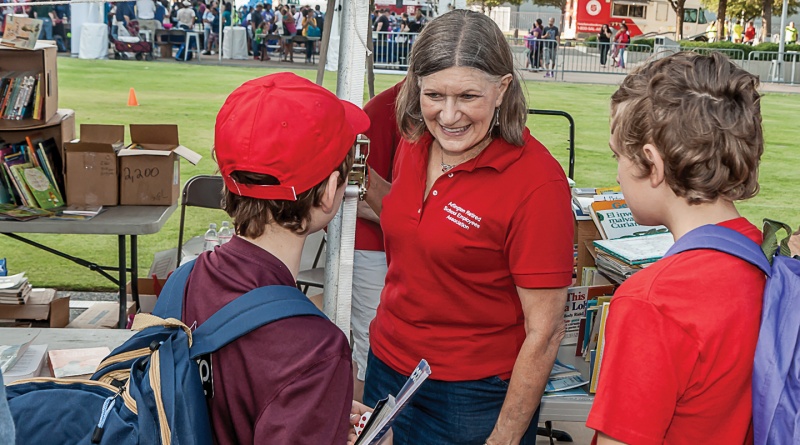 Educators are the maniacs of servitude, a breed like no other, partly because what they do within the halls of a school is not far from what they do inside their homes and at the DMV and in the greeting card section of the nearest Target.

“We’re nurturers,” a teacher of 37 years told me the other day while sitting at her kitchen table.

When they retire, some indeed retire – doing absolutely nothing, and that’s fine, having done pretty much everything for 25, 30, 40 years classrooms that were their second homes and second spouses. Getting them away from binge watching Netflix would be a chore.

More power to you.

Yet then there are the types who can’t shut it off, can’t stop finding a place to be of service, to be, as Leticia Graham put it at the kitchen table of her North Arlington home one afternoon, a “nurturer.”

When the Arlington Retired School Employees Association celebrates its 50th year in 2020 it will also celebrate five decades of servitude in a community that often overlooks them. The ARSE isn’t a well-known entity as, say, the Junior League or the Kiwanis or the Rotary or the Arlington Woman’s Club. There are no signature events held over the years to put them on the map.

What they do is quietly go about their business, which is mostly filling the gaps when it comes to public education.

For instance, when many school children attending this year’s AISD Back to School Kick Off held at AT&T Stadium walked off with a book, the freebie was courtesy of the ARSE. More than 1300 children had books tucked under their arms along with the backpacks and fresh haircuts.

“My daughter didn’t read all summer, but she’s going to read this,” LaSanya Mayo said when her fifth grade daughter picked out “Esperanza Rising,” the Pam Munoz Ryan book about Mexican farm workers. “We get books from the library but it will be nice for her to read without knowing she has to take it back.”

“We’re all about service, about giving,” says Claudia Gray, the organization’s current president. Graham, by the way, is president-elect.

They invited me by one morning to chat about the association, which represents not just retired teachers but administrators and any other staffers as well. Many think all they do is lobby for after career benefits. While that is indeed part of the mission, the more important part of that charge is making sure children in Arlington ISD have what they need to be successful.

“Once you are a teacher and you have done it 40 years, you just don’t let go of it that easy,” says Gray, who taught 40 years. “You are still about giving back because you know how much it will help. At the stadium, when those little kids are excited about getting a book that is free, it’s just a nice sight to see.”

“Most of the kids just reached up on the table and grabbed what they were interested in,” Gray says. “When you see that, you just want to give more.”

Gray taught mostly pre-kindergarten at Crow, Kooken, Atherton, Sherrod and South Davis. She has a master’s degree in Early Childhood. Graham, who has a doctorate in Early Childhood, taught for 11 years in Dallas before coming to AISD where she worked at Kooken, Williams and Crow. She was a classroom teacher, demonstration teacher and facilitator who helped guide other teachers.

Which explains the books. Teachers know that students who engage in books at a young age are often more successful academically.

Two of Graham’s children are teachers. One is at Amos ES and another is in the Ferris ISD.

“We’re all about early education,” Graham says. “It matters and makes a difference.”

So the association will keep plugging along, doing what it does, though hopefully not as much as in the shadows.