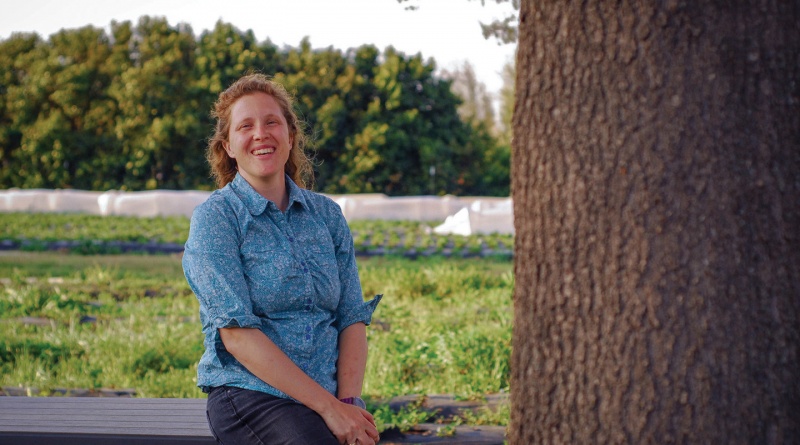 Storm Farms opened in 2017. The six and a half acre plot of land is located at 3010 S. Bowen Road. It was formerly named Gnismer Farm and owned by the Remsing family.

Johanna Storm leases the farm from them. She runs the business largely by herself. She has one paid worker and seasonal volunteers, mostly students doing hours toward completion of their Texas Lone Star Future Farmers of America Degree.

It’s her dream to be on a farm.

“Two weeks into the Horticulture class,” Storm explains, “I called my mom and dad and said, ‘I’ve found my life calling!”

Storm attended Texas A&M University. She initially went to school for Psychology. She registered for a Horticulture class in her final semester because she was short one science credit. That class changed the trajectory of her career.

Storm is emphatic. She loves to farm and admits to being a “plant nerd.” “I’m happy to talk about plants all day, all the time,” says Storm. “I’m more than happy to answer people’s questions because to me, it’s so cool!”

But crops are not the only thing she hopes to grow at her urban farm. The 32-year-old desires to cultivate family memories, experiences and a bigger business.

“We have picnic tables – we want people to come out and spend time outside and spend time with family,” says Storm. “It would be great, obviously, if people bought their vegetables here. But it’s more than that. We want it to be a place where people come to learn about plants and growing things.”

Visitors can visit the farm and pick their own produce.

All of the crops are half organic – everything used above the ground is organic, but the fertilizer is not.

This spring, Storm is growing strawberries. In the summer, she will have fields full of Texas sweet onions, tomatoes, bell peppers, purple hull peas, okra, watermelons sunflowers and zinnias.

The strawberries sell for eight dollars per pound. While some may be put off by the price, Storm brags that there is no comparison to her product.

She says it’s all a matter of science.

Storm says you see that type of breeding in a lot of fruits and vegetables.

Storm plans to grow pumpkins again in the fall. And she’s excited to announce she’s reached an agreement with the City to have a Christmas tree lot in December.