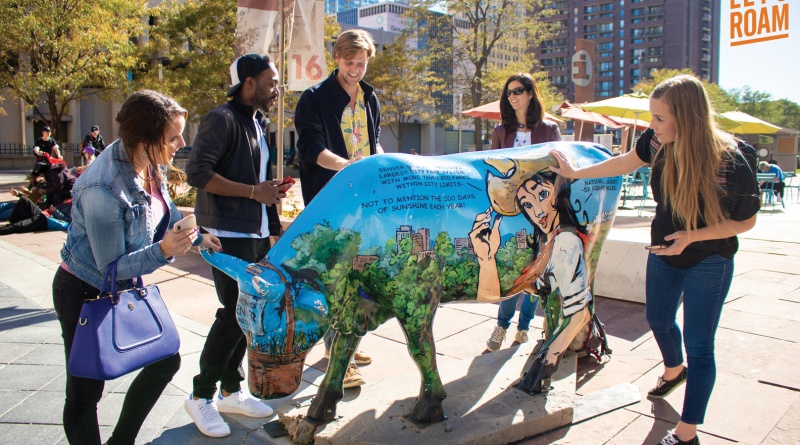 Wander (around Arlington) with purpose. That’s the idea behind Let’s Roam, an app-led outdoor scavenger hunt company, which recently added the Arlington-based “What Dreams Are Made Of” to a list of hunts in more than 350 cities worldwide.

“Arlington is an amazing place to explore. From the University of Texas at Arlington to the Museum of Art, Arlington is a vibrant city dotted with charming parks and fun venues to see music,” says Charlie Harding, CEO & Founder of Let’s Roam. “It’s a great place to get out and walk around, and we hope we can show off some of the best it has to offer.”

You can buy tickets for a scavenger hunt adventure — online or through the Let’s Roam app. Each person then chooses an interactive role, such as Brainiac, Photographer or Explorer. Each role receives messages with trivia questions, puzzles and photo challenges to complete as a group. There’s even a “Youngster” role for more kid-friendly activities.

Let’s Roam is a walking tour that takes participants on a search for plaques, statues and art to solve riddles that can only be found on location.

Harding says the current Arlington hunt has a cultural and historical focus. But it can be custom-tailored to any type of event, including corporate team builders, birthdays, bachelorette and bachelor parties.

“We work with our customers to allow them to start at their office or end at a restaurant or bar,” says Harding. “With these events, it’s about creating a custom adventure so that you and your team can get to know the city and hopefully each other a little bit better by the end of the day.”

That was the drive behind Harding’s dream, one that he envisioned in the fifth grade.

According to the Let’s Roam website, Harding taught himself how to program and spent nearly two decades working on a website that transformed the world wide web into one big scavenger hunt.

And hunting he did! Charlie developed a passion for travel. He loved exploring different cultures and connecting with strangers. It also brought him closer to his older brother, Mike.

Mike was deaf for the first few years of his life. He took in the world with wide eyes and was mesmerized by even the smallest of details. Mike regained his hearing, but never lost his sense of wonder. He was always learning about exotic locations but also found an abundance of history and curiosities hidden in his hometown.

The idea of bringing scavenger hunts from the Internet to the outdoors happened while Charlie and Mike were traveling together. They thought a scavenger hunt would be the most fun way to engage with their new environment.

That was three years ago.

When asked why he started the company, he replies with two words: Travel. Connection.

“At Let’s Roam we want to give people a fun way to get out and explore the world together,” says Harding. “We are building new ways for people to see their hometown and travelers to feel comfortable delving into new cities with confidence.”

There’s an added layer of excitement to the hunts. Since participants earn points for each challenge, you can play for the top spot of each city’s leaderboard. Because there are no reservations or tour guides, you can go on a scavenger hunt any day of the year from 7 a.m. to 10 p.m.

Harding says, “Locals and tourists alike can expect to end the day having seen something new, learned something unique and with a collection of fun photos to show off.”