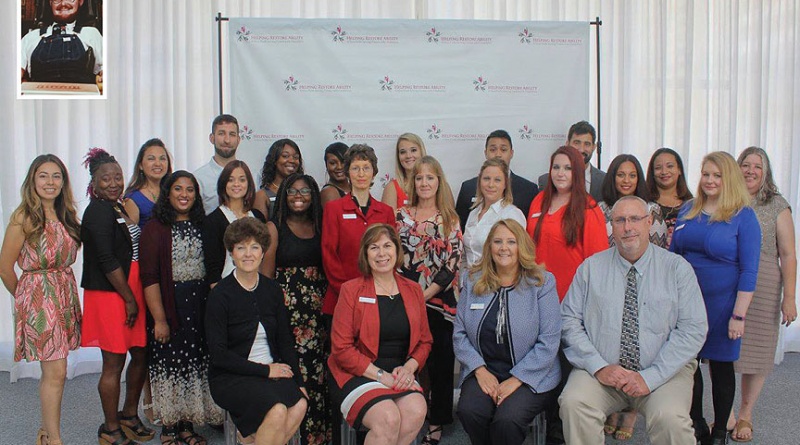 Johnny, 55, injured his spine in a 1980 diving accident and is unable to dress or bathe himself or cook meals. But he lives alone and works full-time. Double-leg amputee Kay, 68, lives alone and drives herself to Tarrant County College where she teaches a French class.

Sandy, 51, has muscular dystrophy and no hand/arm control, but works as a Mary Kay consultant and recently competed in the Ms. Wheelchair Texas 2016, and won.

All have the desire to live independently, pursue a career and enjoy life. And they are able to do so because the Arlington-based non-profit Helping Restore Ability (HRA) provides each with attendants who assist them with everything from bathing, dressing, cooking and errands to feeding and applying make-up.

HRA is the largest non-profit in Texas providing independent living services. Persons with any disabling condition, physical and intellectual, are eligible for their services, many of which are free or based on one’s resources.

Cerebral palsy, autism, spinal cord injury, developmental delay, Down syndrome, multiple sclerosis, Alzheimer’s, diabetes, quadriplegia and spina bifida are the most common diagnoses for which HRA provides care. Its network of more 1,700 care attendants across Texas cares for those diagnosed.

HRA, which will celebrate its 40th anniversary next year, was established in 1977 as the Arlington Handicapped Association by UTA student Sam Provence, who had polio but was determined to wean himself from the iron lung he lived in, so he taught himself to “frog breathe” (gulp in large gasps of air that forced his body to absorb the oxygen, so that pneumatic belt on his wheelchair would squeeze his body and force the air back out of his lungs).

Over time, he was able to lengthen the time “frog breathing” from a minute or two to more than two hours so that he could fly to Washington D.C. and meet with his Congressmen to advocate for funding to start the organization. An award in his name is given each year to recognize an individual who works diligently for disability rights.

The name of the association was changed in 1999 to better reflect its goals and mission, without the implied restrictions of the word handicapped, says Vicki Niedermayer, the organization’s chief executive officer for 15 years. “Our primary goal is simply to assist individuals to remain in their own homes (and out of institutions, including hospitals and nursing homes) for as long as possible,” she says.

About l9 percent of those HRA serves are in Arlington. “But there are likely thousands of Arlingtonites or members of their family who have disabilities but just aren’t aware that we can help,“ she says, noting that the number of clients has grown from 80 clients in 2001 to 1,000 this year.

Niedermeyer is recognized as a state leader in in the field of home health care and is on the board of the Texas Association of Home Care and Hospice.

HRA is funded through grants, individuals and corporate donors, and recently received a grant from the Arlington Tomorrow Foundation that funded enrollment costs for 50 new clients this past year.

HRA has also been selected for inclusion in the Greatest Gift Catalog Ever for the fourth year in a row. The catalog helps connect donors and potential donors by noting the impact of their giving. The link to the catalog is thegreatestgiftevercatalog.org.

HRA will celebrate its 40th anniversary May 20 at Park Place Motorcars Mercedes in Arlington. Details are on its website at helpingrestoreability.org It also has a Facebook page.