10 years ago, destiny kissed the Rangers

by John Rhadigan
in Commentary, Sports
0 0
0 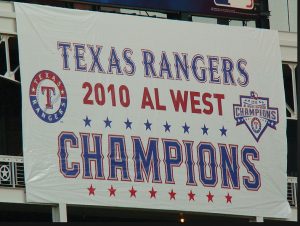 Prior to the 2010 season baseball pundits weren’t calling the Texas Rangers a team of destiny.  The organization was mired in bankruptcy. That meant that Jon Daniels’ hands were tied during the off-eason.

They had a talent-laden line-up, but with a minuscule free agent budget, destiny seemed to belong to some other team.

JD was able to sign Rich Harden to a one-year deal with an option, leaving Michael Young to say, “He has the best stuff in the league. Not some of the best, the best I’ve seen!”

So, there was optimism in the clubhouse supported by the late off-season signing of former Rangers killer Vladimir Guerrero.

Of this move Ian Kinsler said, “To be able to get Vlad, it just got us excited.  We realize that this is our year.  It is all up to us now.”

They hit the field April 5th with Scott Feldman as the first home-grown pitcher to start Opening Day since Kenny Rogers in 1995.

Despite a win on Opening day, the team was just two games over .500 heading into June, yet somehow destiny was lurking.

June saw Micheal Young become the franchise all-time hit leader, passing Pudge Rodriquez. It saw Josh Hamilton win the AL Player of the Month award. It included an 11-game win streak, the second longest in franchise history. When all was said and done, it was the best month the Rangers had ever had:  21-6 for the month, 47-30 over all and tied with the Yankees for the best record in baseball.

The highlight of the dog days of the season came on Aug. 4th in Seattle. Legend has it that Michael Young launched that grand slam into the Seattle night at the exact moment that the sale of the team was completed back in Texas.

A group led by Nolan Ryan and Chuck Greenberg won the auction, and everyone in the organization felt like they were on Destiny’s doorstep!

They clinched the division on Sept. 25th in Oakland. Even in a small visitors clubhouse the celebration was sweet. The Rangers advanced to the post season for the first time in over a decade with a 90-72 record.

The playoffs got off to a weird and wonderful start in Tampa.

Cliff Lee stifled the Rays in a 5-1 victory in game one. C.J. Wilson was even better in game 2 – he shut Tampa out, and the Rangers were headed home with a commanding 2-0 lead in the series.

It went all the way to five games, but game five was one of the most impressive and aggressive games in the history of the franchise. It had been 40 years since a runner had scored from second on an infield grounder. The Rangers did that twice in this game. ALCS here we come, Bring on the Yankees!

The Rangers were 1-9 all-time against the Bronx Bombers in the post season. NY came from behind to win game one. The loss felt familiar and devastating to everyone except the players, who believed they were destined for greater things.

Colby Lewis became the first Rangers pitcher to win a home playoff game with a victory in game two. The Rangers won two games at the venerable Yankee stadium. And on Oct. 22nd, a crisp clear Friday night, Lewis took the ball again.

Josh Hamilton hit a three-run homer in the bottom of the first and the stage was set.  The best night in the history of Globe Life Park was on!

When Neftali Feliz struck out former Ranger Alex Rodriquez to end the game it was ironic, it was euphoric, it was destiny!

The Rangers were headed to the World Series for the first time in Franchise History.

There weren’t many highlights in the series against the Giants, but there were more wins to come.

Josh Hamilton won the batting title and MVP of the American League, Neftali Feliz was rookie of the year, Ron Washington was the American league’s best manager and Jon Daniels its best executive.

If it is necessary to win in all to be called a team of destiny then I guess the 2010 Rangers weren’t, but they felt like Destiny’s Darlings.  They were part of a great team that would be even greater the next year.