A car with a look all its own

by ArlingtonToday Magazine
in Business and Education, Commentary, Community, People
0 0
0 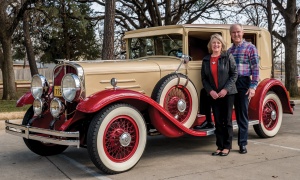 There are more than the usual number of exceptional qualities that distinguish Bill and Jean Jewell’s 1930 Franklin Airman Club Sedan. First, let’s get beyond the most frequent thing people say when they see the Arlington couple’s car when it’s out and about the community in parades, on holidays and for special events.

The exhortation is almost always a version of, “I’ve never seen a Franklin before.” 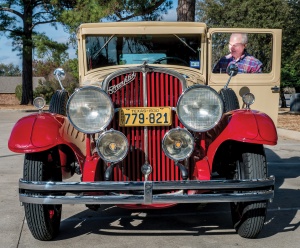 Bill just smiles when he hears that because it is exactly what he was hoping for when he acquired the classic antique four years ago. “We wanted to shop around for something not very common.”

After developing the first of the Franklins in 1902, the company moved into competition with Cadillac and Packard and other luxury brands in the very early era of automobile production in the US.

Those first ones looked like horse-drawn carriages of the day, only without the horse. Over the next couple of decades, Herbert Franklin continued to refine and innovate.

The major characteristics that separated the Franklin’s from the competition was their air-cooled engines, a wood body, and lightweight mechanical materials making the car more responsive to the driver when compared to other luxury cars of the period.

By the time the 1930 model was introduced, the refinements were quite advanced with the six-cylinder inline engine producing 100 horsepower that made it possible for the car to reach speeds up to 60 miles per hour. 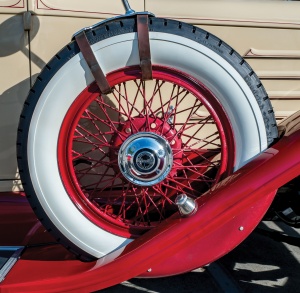 That year the company built just over 6,000 units, less than half the number of the previous year, and suffered an operating loss in excess of $4 million, or the equivalent of more than $57 million in today’s dollars. The Great Depression had taken its toll on the company’s product, and by 1934 Franklin Motor Company was bankrupt. Bill’s research has found only about 3,700 Franklins left in existence. So, his search for something uncommon was achieved, and he’s reminded of it whenever someone reacts to it with that now-familiar refrain.

But that is only the beginning of things unique about his car.
Of all the car restorations that have been done in automotive history, this might be the only one to which an entire book has been devoted, describing every detail of the rebuilding process literally from the ground up.

The non-fiction work modestly titled “Practical Car Restoration” unfolds over 210 pages and describes in the tiniest of detail every nut, bolt, bracket and washer, starting with the bare frame mounted on a couple of sawhorses.

Bill has been in touch with the author on several occasions to ask questions and to get some guidance on any maintenance he needs to perform. 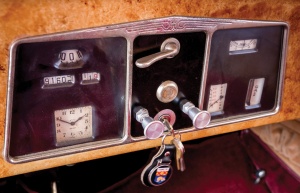 Then this distinguishing characteristic: The Jewells have something in common with Amelia Earhart and Charles Lindbergh. Both of these legendary pioneers of the future owned Franklin automobiles.

In fact, the optional hood ornament that adorns their car is a replica of Lindbergh’s Spirit of St. Louis inspired by the aviator’s historic trip across the Atlantic.

Bill’s interest in antique automobiles goes back to when, as a 15-year-old kid, he received from his father a non-running 1936 Ford. With the help of a couple of friends, he was able to get it motoring on the road.

Once engaged in the journey of bringing old cars back to life, he developed a passion that might last a lifetime.

He’s certainly passionate about this Franklin that is perfectly restored to showroom standards and the source of family pride the Jewells love to share with others.

They will be doing just that at the Concours d’Elegance of Texas event on April 22 at Arlington’s premier linear park between Globe Life Field and AT&T Stadium.

You ought to come see the Jewells’ Franklin (and more than 100 other classic cars) and try your own version of “I’ve never seen a car like this before.” 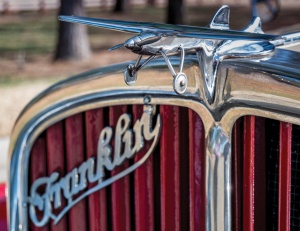