A Classic Car that Honors Grandmother 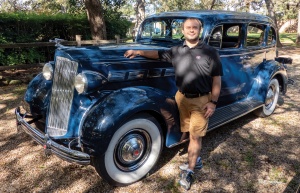 David Oberle has a passion for great American classic automobiles, and his collection boasts of having one from every decade from 1900 to the year 2000.

But this 1937 Packard has a special place among his other remarkable cars in that it was built in the same year his grandmother was born. So, in her honor, he calls it his “New Nana” and says it’s his favorite.

David found this exceptional model last year in Nebraska and confirms that he especially enjoys driving the smooth-running One-Twenty model motorized by its big straight-eight, 288-cubic-inch engine producing 120 horsepower. As a highway engineer, he does this on some of the roadways he helped design. 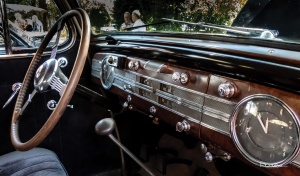 In recent months, he has taken it to events sponsored by the respected Classic Car Club of America, where he is a member. Most recently, he had the opportunity to show it off in fellow collector Mike Ames’ annual gathering among other invited guests with their limited edition cars at Ames’ Arlington estate.

The Packard Motor Car Company produced these mid-priced, eight-cylinder cars from 1935 to 1937 in a marketing strategy to compete with the General Motors’s LaSalle, the Chrysler Airstream and the Lincoln Zephyr. It kept the company going during the final years of the Great Depression and provided buyers the cachet of owning what was then considered one of America’s most prestigious cars.

Prices for the up-market Touring Sedan models like this one were just under $2,000 resulting in the company’s immediate success with consumers, as more than 50,000 of them rolled off Packard’s massive assembly line in Detroit. 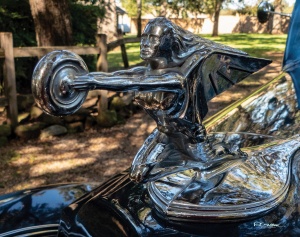 While the car’s design presented many interior art deco features, its “Safe-T-Flex” independent front suspension was considered a breakthrough in engineering, carrying the load in style and comfort – a result that its current owner finds to be as nice today as it was some 80 years ago.

What about that odd canister style cylinder attached to the front passenger side window? While home air conditioning wouldn’t become widely used until the 1950s post-World War II economic boom, you could ride in cool comfort in your automobile with one of these things in the 1930s.

Called a “car cooler,” it worked via the evaporation of water inside the cooler and in the process, transferring heat from the surrounding air into cool moisture-laden air inside. It worked when the car was in forward motion, or a fan-powered version would do the job when the car was standing still or moving at low speeds.

With the introduction of the 1940 models, Packard became the first car company to offer factory-installed air conditioning. Thirty years later, more than half of all new cars sold were equipped with what was fast becoming standard equipment.

David enjoys demonstrating the original technology by removing if from the car’s trunk, attaching it to the window, and showing how the air would blow through a vent at a right angle to dispel the summer heat.

He’s also pleased that he was able to find an original, unrestored 1937 Texas license plate to add to the authenticity of his proud example of one of Packard’s flagship automobiles that provided the company with its esteemed reputation that today is carried on by collectors everywhere.