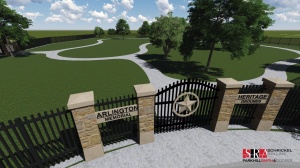 During the past year, I have had the opportunity to serve with 20 fellow citizens from diverse and varied backgrounds on a mission to finally honor the region’s first settlers long ago buried in a neglected and endangered cemetery in the center of our town.

Our objective has been to restore what is now known as Arlington Heritage Memorial Grounds into a powerful place of honor to those who first established a tiny community where a stagecoach stopped along its journeys across the frontier of North Texas.

That crossroads set into motion a transformation spanning more than 170 years that became today’s city of nearly 400,000 people.

Historians have created a good record of Colonel Middleton Tate Johnson, often identified as the father of Tarrant County, but I imagine that many who are reading this will not recognize who he was or what he did.

Nor would many of the thousands that pass by his Arlington grave site every day as they travel along Arkansas Road where it intersects with Matlock Road.

After serving in the Alabama state legislature at the age of 22, he made his way in 1839 to Texas, where he would become a Texas Ranger. In 1848, he settled his family on a land grant that became known as Johnson Station, situated in the vicinity of the intersection of South Cooper Street and Mayfield Road.

His cotton plantation, with the labor of many slaves, flourished, and he became one of the richest and most influential men in the area. Records confirm his leadership in the founding and organizing of Tarrant County and, according to some reports, donating the land in 1861 for the courthouse.

He opposed Texas’ succession as the state joined the Confederacy but went on to serve as a regimental commander, then was elected to the state constitutional convention after the Civil War ended.

While in Austin, he suffered a stroke and died at the age of 56.

A lengthy obituary in the Dallas Weekly Herald recognized him as a leader in the development of the Republic and State of Texas. It concludes, “The death of such a man as Col. Johnson would, at any time, be felt as a great loss to society, the country, and a real loss to the whole state.”

He was buried in the state cemetery in Austin, and in 1870 local Masons are credited with moving his body home to Arlington.

And, that brings us to what’s taking place right now to memorialize the cemetery where he, and family members among an estimated 80 others, including his plantation slaves, were laid to rest.

The work, under the leadership of the committee’s chairman, County Commissioner Andy Nguyen, is making good progress toward restoring headstones and marking grave sites of the unknown that have been identified by scientific, ground-penetrating technology.

The cemetery remained active into the 1950s and for many years was the only place in the city where people of color could be buried.

Money is being raised for an entry gate that will open to a pathway through the property and for fencing to secure the cemetery to make it a visitor’s destination complete with the stories of the origins of the region.

Geraldine Mills, Executive Director of the Arlington Historical Society, has pursued this project for many years and explains why, “It doesn’t matter if they were noted leaders such as Col. Johnson or if they worked the cotton fields, tended animals, or cooked the food, they all contributed to our town. They must not be forgotten.”