A great day to be in Arlington 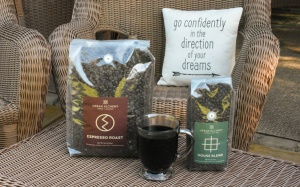 Julia Hermann is standing in front of the shiny new George W. Hawkes Downtown Library with an 11-month-old snuggled inside a stroller. She looks puzzled and perplexed. She glances left, right, left again.
“Lost?” I ask.
She answers yes. Then no. Then kinda.
Says she lives in Southwest Arlington with her husband, two kids, two dogs and five fish. Last time she was here – here meaning downtown Arlington – it didn’t look like this.
“So … where’s City Hall now?” she wants to know. I tell her it’s still there. Just can’t see it over the sprawling library. And where the library used to be is now 101 Center, high-end apartments with ample retail space planned for the first floor.
She spins around again as though she’d just been beamed down. Excuse Julia if she can’t quite figure out east from west. “Wow,” she says. “I’m really turned around here.”
This is a good thing.
Time was you could stand at Abram and Center, take a quick spin, and see all of downtown.
Try that little trick now.
A downtown transfiguration before our eyes means a city transfiguration, and that says a lot about a place once written off for its elder status and an unfortunate proximity between a couple better-known behemoths. Not only is downtown becoming what it ought to be – I’ll touch a bit more on that in a sec – but also it’s as though Arlington itself has taken a few shots of adrenaline.
Mayor Jeff Williams is darn near comical these days with his “What a great day to be in Arlington!” mantra he tosses out at schools, at churches, at groundbreakings – wherever there’s a microphone, basically – but it’s as though our fearless leader has willed such a thing into existence. It means Arlington’s boast of being this terrific place to work/live/play is coming to fruition, and pretty much the way it was planned some time ago by those who have a far better entrepreneurial sense than I do.
Just northeast of us the $1.1 billion Globe Life Field will emerge, in 2020, I hear. Adjacent to the new ballpark will be a 300-bed hotel, a convention center annex and 100,000 square feet of dining, retail and entertainment venues. Texas Live! Is what they call it. Arlington Backyard, an outdoor event pavilion, will be a space large enough to accommodate 5,000 live event-going folks; a 100-foot-diagonal video screen will lift up to reveal the concert stage. (AT&T Stadium, just a quick jog up the road, has spoiled us. It’s as though we can’t live without those things now).
It all starts, for the most part, with a downtown that creates a kind of critical mass of activities and a place where commercial and cultural functions converge, giving it the sort of aesthetic that conjures up feelings of urban pleasure.
Underneath all that is a thriving business economy and entrepreneurial spirit giving Arlington a personality of its own, or at least walkways to bump into people, as I did. It was Libraries Director Yoko Matsumoto, who was out in front of Hawkes checking out some new signage. The place opens this month.
I ask what it is like to be in the midst of this revival of sorts.
“Exciting,” she says. “Having all of this around us is such a great thing. It only adds to what we’re trying to do here.”
As we talk, a skateboarder zooms by. Then a man with his dog. Then three UTA college students.
That’s what we are trying to do. When Tony Rutigliano presided over the Downtown Arlington Management Corp., this is the world he spoke of.
Now he’s actually a part of it as owner of Urban Alchemy, a much-chatted-about coffee and wine bar on east Main Street. That’s where the students were headed, I bet.
Didn’t catch Rutigliano when I stopped by. Never mind. I already know what he’d say when asked how things are going.
It’s a great day to be in Arlington, Ken. It’s a great day to be in Arlington.