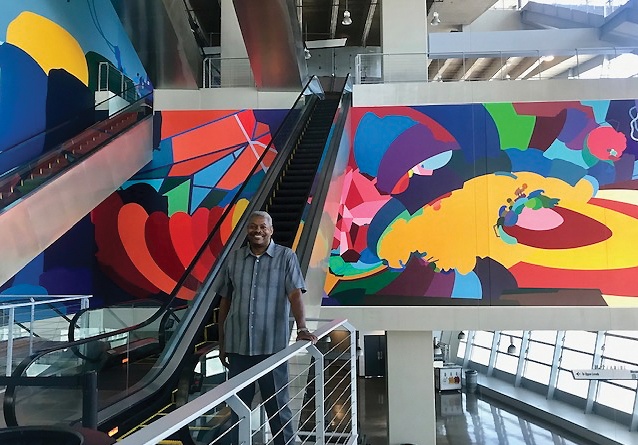 “We’ll have more,” Whitfield says of the 59-piece collection. “Every place that the Dallas Cowboys have, we’re putting artwork in it.”

A quarter-of-a-century ago, the 58-year-old, who stands about 6-feet, 5-inches tall, began working as security for the Dallas Cowboys at Texas Stadium. But his life changed 10 years ago. That’s when Jerry Jones, the team’s owner, told Whitfield that his wife, Gene Jones, wanted to talk with him. Whitfield recalls thinking he must be in some sort of trouble. Instead, he was asked to become ambassador of the Cowboys’ art collection.

“I didn’t think I was going to be doing the artwork, I tell you that,” he says. “I was scared to death. It was the first time in my life I was doing something I didn’t know anything about.”

Shortly after he took the job, an arts council was formed, and he started visiting galleries and museums and meeting with curators and docents to learn everything he could.

“I learned from them you’ve got to do this in your own style,” he says about the guided, customized tours, which cost $26.

The collection at AT&T Stadium showcases the work of more than 40 artists whom Whitfield says he learned a lot about as well. “Passion,” he says. “It’s what they all have. They’re not trying to fit in. They do their own thing.”

The criteria for artists was that their creations couldn’t have any political or religious backing or portray “anything that would offend a normal person,” says Whitfield, walking past some premium seats and gesturing toward the standing room only section and then pointing out that the artwork is visible from various locations and above concession stands.

“We wanted people to come here, and, no matter whether they paid a little bit or a lot of money, that has nothing to do with the artwork,” he says. “The artwork is 100 percent, no matter where you go in this building.”

In one section of the stadium, Whitfield talks about “Two Minds,” a red and white work of art created by British artist Terry Haggerty.

“Some say it is a flag waving in the wind, or peppermint candy,” he says. Later, Whitfield highlights the reflective, outdoor “Sky Mirror” by Anish Kapoor and “Blue Field Explosions” by New York artist Gary Simmons, whose work can resurrect memories of early Batman brawls.

The vibrant “Coming Home” and “(Meet me) at the Waterfall” by German artist Franz Ackermann, “Win!,” a wordy work of art by Mel Bochner, and “Coin Toss” by University of North Texas art professor Annette Lawrence are also among the large-scale works.

“Starfield,” by Teresita Fernandez, encourages people to slow down and look up, Whitfield says.

“The black background shows a reflection of you,” he says of the work’s mirror-like aspect. “So you get to be a part of her “Starfield.”

Whitfield notes that the artwork was created hands-on at the stadium and each is accompanied by its own plaque. Cost was not revealed, he says, “because it’s not about money,” but about passion.

“Art gives you opportunities,” he says. “All those mixture of artists makes no difference. Art brings out the best in all of us.”