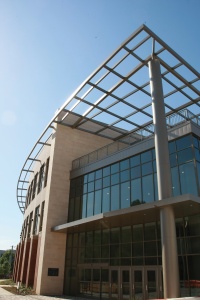 Arlington’s long, long awaited George W. Hawkes Downtown Library opens this month with a double-barreled celebration. The official public debut comes on Saturday, June 16, but the Friends and Foundation of the Arlington Public Library offers a sneak peek at its “Dreams Do Come True” celebration the preceding Wednesday, June 13.

Proceeds from that event, which will be conducted from 6:30 – 8:30 p.m., benefit the new Library. In addition to heavy hors d’oeuvres by Awesome Catering’s Jorge Ventura (including his haute cuisine mac and cheese), drinks, live music by Sara and the Saratones and a silent auction, Library staff will be on hand throughout the building to show off and demonstrate its features, including the rooftop garden, in which dessert and champagne will be served. Tickets are $75 and may be purchased online at https://clcc.abilafundraisingonline.com/dreamscometrue.

The Downtown Library has, indeed, been a dream, and a long one. The official timeline began in December 2009 with a stakeholder kickoff meeting, but the project took its first step toward reality in 1999 when a city bond election provided $300,000 to fund a study whereby the existing facility might be expanded or replaced. Serious infrastructure problems ruled out expansion, so the study by Providence Associates proposed three alternatives – a new building on the current site, elsewhere in the central area or in some other sector of the city.

Eventually, City Council decided to raze the old building in favor of a retail/residential development and to construct a new facility north of City Hall. Newberry Architects of Houston was chosen for the design, and Byrne Construction of Fort Worth as the general contractor. Construction cost was about $30 million – $22 million from the City of Arlington and the remainder from the Arlington Tomorrow Foundation and the Friends and Foundation.

David Tees, chair of the city’s Library Advisory Board, sees the new Library as a catalyst for the continued growth of Downtown Arlington.

“Libraries historically are well-grounded in the life of a community. By nature, they serve as gathering places and ‘vibrant activity hubs’ such as envisioned by the city’s strategic plan,” he says. “When the new Downtown Library opens this month, people will want to see this magnificent new building and experience for themselves the amazing and unexpected new applications, technologies and processes available there.

“It stands to reason that many of these people will be hooked on the library after a visit or two, and that they will encourage their neighbors to come and see. And when they do, and this is the catalytic effect, they will be inclined to take advantage of nearby restaurants and other local businesses, thereby boosting the local economy and encouraging other businesses to join the party by relocating to and investing in Arlington’s vibrant downtown.”

Yoko Matsumoto, named director of the Library System only a few months prior to the May 2016 groundbreaking, has vivid memories of the day. “I remember sitting there in that parking lot and thinking, ‘How can we actually fit this building in this space?’” she says. “There was no way.”

There was a way, however, and Matsumoto was a big part of it, learning on the job about the ins and outs of construction and adding her own touches. “It’s been pretty fascinating to see all the different phases and the problem-solving that had to come into it,” she says.

The result is 80,000 square feet over three floors. It doesn’t sound much larger than the old facility (60,000) until one remembers that much of that space was taken up with Library System administration and materials processing, two functions now to be housed elsewhere.

It’s a point of pride to Matsumoto that those three floors, though the same general shape, are vastly different in tone. “The textures, colors and vibe of different spaces are made for different areas,” she says. Some visitors might not find the borderline rambunctious children’s area appealing, she says, “but you’re going to find your space. There’s a space for every type of person who comes into our building.”

So, while the first floor resounds with activity in the children’s area, the second floor is more muted, even if it does include the teen and “tween” sections with their neighboring “maker spaces,” one for art and one for science/technology. But there’s also “Arlington Reads” – the adult literacy area – and a large section devoted to business and technical materials and to computer stations.

Visitors seeking quieter, more traditional venues find them on the third floor with its vastly expanded genealogy and local history section, study rooms and the adult fiction and non-fiction collection. This floor also contains two of what Matsumoto calls “wow factors.” The rooftop garden on the southeast corner provides a spot for al fresco reading or laptop perusal. In the northeast corner is the space ideal for quiet reading or contemplation – comfy chairs, a glass wall looking out at the butterfly garden and even a fireplace for maximum coziness. The fireplace owes itself to Matsumoto’s persistence.

“We wanted that space to have a special ambience,” she says. “Environment is really important.” When the planned gas fireplace fell victim to costs, she argued for – and got – an electric model. “I have one in my house, and it just means having this space that relaxes you,” she says, “makes you feel tranquil.”

On the more serious side, she went to bat for “hearing loops” built into the periphery of nine rooms (and also in the new City Council Chamber) to provide a magnetic, wireless signal picked up by those hearing aids equipped with a telecoil. “That was a big thing for me,” she says. “I feel very proud that we pushed the envelope. Hearing problems are something that affect more children and also veterans returning from war. Usually, municipalities tend to be behind the times [on such services for the disabled]. This is putting us ahead.”

But just as important to Matsumoto as what the new Library is, is what it might become – or rather what it might evolve into with the efforts of her staff. “We have this wonderful new space, and we can break the mold of what we have done in the past,” she says. “You can build a great building, but you need the staff with the vision or the creative minds to understand our community and figure out services that meet its needs in unique ways.”

For instance, the children’s programming room, officially “The Play Room,” will be just that. When there’s no specific event, such as Story Time, scheduled, it’s available for parents to bring their kids just to play – safely and free from weather extremes. The same idea holds true for all other public areas and reflects Matsumoto’s belief that “human connection spaces” are part of the mission of the modern public library. “We’re in a time where technology has both connected us and, in another way, disconnect us from one another,” she says. “So, I think libraries need to be places people can go to have that human connection in terms of space, getting connected with different community things.”

To that end, there are more than a dozen meeting rooms of all sizes and for all ages, and the rooms’ names echo the concept of positive and productive interaction. “I did some research on ways to incorporate positive words or empowering words,” Matsumoto says. “We want to incorporate positivity in the vocabulary our staff uses, the vocabulary the public comes across.”

Thus, what may be labeled study or meeting rooms on the floor plan now carry such names as Excellence, Inspire, Explore, Dream and Resilience. A teen room is named Be Unique, Be You.

Matsumoto’s contributions to the Downtown Library are built atop those of prior directors Betsy Burson, Rick Smith and Carrie Siegfried. “I just happened to come in at a really interesting time,” she says. “I wound up being the lucky one who got to work on the fun stuff.”

This is not to say she’s been idle. Rather she’s been in perpetual motion, going anywhere and everywhere in Arlington to answer questions (yes, there will be adult restrooms on each floor, and yes, the elevators will be speedier) to imbue audiences with her passion and exuberance about the new building. In fact, she had a niggling worry that she’s been too effective a cheerleader.

“It’s going to be a really cool thing, and I hope the Library System will live up to the expectation,” she says before, in the next breath, regaining her natural buoyancy. “We’ll be fine. Maybe I just tend to put a lot of pressure on myself.”