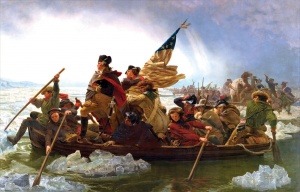 This highly dramatized Emanuel Leutze painting hangs on the wall in the Metropolitan Museum of Art and among our Christmas home decorations. Here’s why:

It was on Christmas Eve 242 years ago that our less-than-six-months-old nation was on the verge of coming to an end. The words of a controversial journalist may have turned things around.

Sir William Howe, a British general with the world’s strongest army under his command, had chased George Washington and his ragtag troops of farmers and merchants out of New York City, through New Jersey and into Pennsylvania.

Washington’s men were enlisted only through the end of the month and were ready to go home to escape the awful circumstances of a war that appeared hopeless to them.

Only some in the Colonies embraced the whole business of independence.

Maybe it was not such a compelling idea, after all. Howe’s forces, although slowed by the winter, were certain to overpower the army of the fledgling United States and put an end to the rebellion.

There were expectations that even some signers of the Declaration would renounce their act and that the Continental Congress would disband, some of its members to be hunted down and summarily executed as traitors. Public opinion was divided among those who thought these politicians were leaders of bold action and some who thought them a bunch of fools.

The sense of despair and low morale was growing, and Washington himself was at a loss to know what he could do to turn things around. His men were without winter clothes; many were without shoes. Supplies, ammunition, cannons and just about everything else needed to wage a successful battle were depleted.

Congress could offer little help; it had neither the power nor authority to raise money to sustain the army.

Among Washington’s men was Thomas Paine, the 37-year-old author of the most influential writings preceding the Declaration. In his pamphlet Common Sense, Paine had presented compelling arguments that the American people required a new nation. It was Paine, perhaps more than any other writer, who aroused the people to support independence. More than 500,000 copies of Common Sense, published in January 1776, had been distributed by the time

Paine, realizing that the dream of independence was now hanging by a thread on the shores of the Delaware River, issued a new document on Dec. 23, 1776, that had a much smaller audience as its target. It was to become even more vital to the survival of American freedom than the widely circulated Common Sense.

You learned some of the words in your American history class but may have not realized the reason they were written.

Paine empathized with the beleaguered men of Washington’s army and acknowledged the obvious: THESE are the times that try men’s souls. Then he immediately challenged them with these carefully chosen words: The summer soldier and the sunshine patriot will, in this crisis, shrink from the service of their country …

The risk Washington took in letting Paine distribute his correspondence among his men was that it would backfire, and the troops, instead of being inspired, would be offended that someone was indirectly calling them cowards.

Paine went on to explain: Tyranny, like hell, is not easily conquered; yet we have this consolation with us, that the harder the conflict, the more glorious the triumph. What we obtain too cheap, we esteem too lightly: it is dearness only that gives everything its value.

He then reminded the men that they were bound to the king of England and if being bound in that manner is not slavery, then is there not such a thing as slavery upon earth.

The appeal to their sense of resolve was made thusly: ‘Tis the business of little minds to shrink; but he whose heart is firm, and whose conscience approves his conduct, will pursue his principles unto death.

Paine’s words stoked the fire of freedom in the bellies of the soldiers, and within 36 hours Washington was crossing the Delaware and defeating the British at Trenton and Princeton. The victory ignited the army. Enlistments skyrocketed, and Washington was able to carry on the fight, ultimately to the surrender of

Paine would continue to motivate the troops; the 15 issues of his war writings became known as the American Crisis papers. But without that Christmas victory, the army would have been dissolved, the war ended, and today we might all be subjects to Queen Elizabeth.

Merry Christmas, everyone – and thank you, Mr. Paine.