A tale of two churches ministering for 150 years

by ArlingtonToday Magazine
in Community
0 0
0

Grand Prairie’s West Fork United Presbyterian Church is celebrating its 150th anniversary this year, although, technically, the history began in 1869, when Rev. Andrew Shannon Hayter arrived in the Watson Community and began talking with the men of the community about a church and a school. Here are some highlights of what transpired since:

– In 1870, the same year that Texas was reinstated into the Union, Reverend Hayter organized the Good Hope Cumberland Presbyterian Church and was its first pastor and a teacher.

– Rev. Hayter was also a surveyor and was serving in that capacity when the Texas and Pacific Railway Company came through the area in 1876 and purchased land for a town site. He is said to have named the town Arlington in honor of General Robert E. Lee’s home in Virginia. Rev. Hayter is considered by many to be the “Father of Arlington.”

– When the Dallas-Fort Worth Turnpike came through, the building was moved to its present site on Santerre Drive in Grand Prairie, in what is now the Great Southwest Industrial District, in 1955. The Steeple was designed and constructed by Olin Wheeler in 1956. Later, a fellowship hall was added. The church was designated as a historical landmark in 1982.

West Fork Presbyterian is one of the oldest churches in the community to have Sunday worship service on a regular weekly basis for 150 years – that is, until Covid-19 hit in March. After a brief hiatus, services continue on the church lawn. 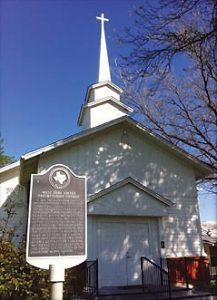 Mansfield’s Bethlehem Baptist Church last month held a service to mark its 150th anniversary, making it the oldest predominantly African-American church in Tarrant County. For the past 28 years, Bethlehem Baptist has been led by Rev. Dr. Michael A. Evans, Sr. He is the 19th pastor since the church was organized in 1870 by Rev. Green Medlin. Here are some highlights from the past 150 years:

– In the early years, services were conducted in various homes before a “Brush Arbor” was constructed to host church meetings. Rev. Medlin remained as pastor for 22 years.

– In 1892, Rev. J. P. Phillips conducted services in the old school house located at what is now 1188 West Broad. In 1896, a church building and a parsonage were erected on East Broad.  There was an “Amen Corner,” a “pot bellied” stove, and a post in the center of the building to support the structure.

– In 1946, Rev. L. E. Billingslea accepted the pastorate. Under his guidance the physical plant was remodeled several times; the church was now located on West Broad at what is now McClendon Park.

– In May 1991, 24-year-old Michael A. Evans became the youngest senior pastor called to serve at the Bethlehem Church. During Rev. Evan’s time of service, the church has been incorporated and it began offering oversight of the BBC Education Enrichment Inc., a non-profit organization designed to enhance area children’s ability to study and achieve educational goals. In addition, the church has initiated the creation of the “Historical West Mansfield Community Development Corporation, a non-profit corporation dedicated to the continuing economic and community development of the Western Sector of the City of Mansfield.