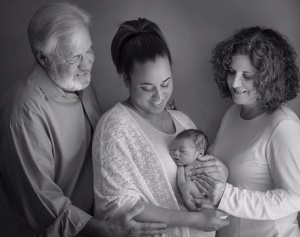 Retired businessman and Arlington community leader Peter Scott had a late start at fatherhood, and Father’s Day celebrations have likewise been a bit unconventional – until this year when they took on new meaning with the birth of his first grandchild.

Scott was only 21 when his own father died; 35 when he married wife Lynn. He was nearly 40 when the couple adopted daughter Kristin and, later, son Joseph. Scott admits that while Lynn always wanted children, he was not convinced he would make a good father.

Both Scotts were working professionals – he was a financial adviser, helping clients plan for retirement, and taking on various leadership roles in the community; she was on the partner track with a law firm.

But this fatherhood thing – that did not come so naturally to Peter Scott. “After all, I grew up in the 1960s, when life was about me and my causes,” he explains.

Still, Peter and Lynn were a modern couple, sharing household duties and parenting tasks, and building a life around their children. Father’s Day was more an outing than an observance. Of course there were gifts and cards, but it was primarily a family event, with a movie and dinner out (barbecue – Peter’s favored food).

For two decades the Scotts grew together in this new parenting model, then came the empty nest with Kristin and Joseph leaving for college and the start of careers. Joseph followed a path that led him to a business opportunity in Oklahoma; Kristin completed a degree in Hospitality Management at the University of North Texas. For Peter, the leadership roles expanded, including activities in Rotary (Past President of a local club and on track to be District Governor in 2019), immediate Past President of Theatre Arlington, on the Board for Downtown Arlington Management Corporation and on the Convention & Visitors Board, where he chairs their new Foundation.

Then on Jan. 11, on Kristin Scott’s 28th birthday, she gave birth to Hudson James Scott, and Peter and Lynn entered the new world of full-time grand-parenting. Now the household is aflutter again with the important activities of childhood, and this time Peter has embraced the new role without hesitation.

“I always enjoyed my children,” Peter says, “but I have come to understand that fatherhood is a work in progress. I wish I had known then what I know now – how to be more patient; how to better give emotional support.”

Perhaps Peter improved at this parenting thing with practice; perhaps he matured, mellowed over the years. He also has more time now that he is retired. Still, there is something else afoot in regard to this coming Father’s Day observance, a special celebration in his new role as “grandfather.”