A welcome mat for vets 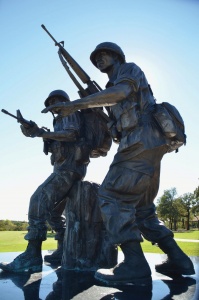 The other day I was at Veteran’s Park attempting, with meager luck, to find a decent angle to snap a photo of the two bronze soldiers crouching slightly, guns in hand, in what was suppose to be a battlefield somewhere in Vietnam during that bloody conflict. The American and South Vietnamese soldiers are atop the eight-foot sculpture honoring the sacrifice of the South Vietnamese servicemen and the U.S. military.

It must have looked odd enough for a man to come strolling over from the playground to ask what, exactly, was I doing.

He found my predicament amusing and during our brief chat told me how he passed a handful of parks from his East Arlington home to get to Veterans, partly because, as an Army vet himself, he felt a sense of purpose by merely being in the presence of the sculpture.

I asked what he did after his service, and he told me rather reluctantly how he “bounced around a bit” doing “this and that,” although I got the idea that meant unemployment. Now, though, he works for a heating and air shop as a technician. Not exciting work, he confesses, “but it’s a job and it pays the bills, you know?”

Surely I do. The vet, who didn’t want his name used, said he had attended Tarrant County College to obtain the skill, and it certainly piqued my interest because a few moments earlier I was on the phone with TCC’s Communications representative, Rita Parsons, who was expounding on the welcome mat put out for veterans who might want to attend the college.

After perusing the TCC website it was quite clear that this is a special place for veterans, in part because of the nudges they give veterans to try and return or start college and the safety nets provided if they step into a pothole or two.

Veterans attending TCC can receive specific academic advising catered to them, counseling, tutoring, their own veterans advocate and a director of Student Financial Aid Services whose primary job is to assist military veterans and their family members in understanding and obtaining benefits available under state and federal financial assistance programs. You can even request credit for military service.

No wonder TCC was named a Top School by the 2018 Military Advanced Education & Universities, and ranked as the number two community college in the nation by the Military Times magazine, Military Times Best Colleges 2018.

James Foreman, an Air Force vet and TCC’s public services librarian, says the place is about as welcoming as it gets when it comes to making former service men and women comfortable, and that’s more than half the battle right there.

For the second consecutive year, Foreman moderated a panel about “The Veterans’ Experience,” in which veterans discussed their experiences in and out of the military.

“As moderator, I asked people who have served about their experiences. It was a very diverse panel,” says Foreman, who spent a decade in the Air Force. “They merely talked about what they did and how it affected them.”

Foreman says being on a college campus with other veterans gives them an opportunity to get together and talk about their shared experiences.

“Plus it gives those people who have not served in the military an opportunity to get a sense of what it’s like,” Foreman says.

The vet at the park wasn’t all that keen on talking about it, but Foreman says even the “silent types,” the former service men and women, return now to a culture where it’s okay to share.

Yet it’s okay if they don’t want to say anything.

Perhaps that’s the glory of TCC and other colleges like it that embrace veterans with open arms, provide the various programs to sustain them and the safety nets to catch them when they fall.

Providing an easy path to an education is even better.