by ArlingtonToday Magazine
in Arlington News, Business and Education, Community
0 0
0 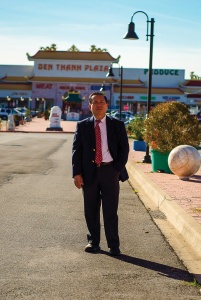 Meet David Dang. He is a North Texas businessman who is helping to change the landscape of East Arlington.
Dang bought the Ben Thanh Plaza and Central Market (formerly the Hong Kong Market Place) in 2012. It’s located on the corner of East Pioneer Parkway and New York Avenue, directly across the street from the new Arlington ISD Dan Dipert Career and Technical Center.
“That is a significant corner,” says Sue Phillips, the President of East Arlington Renewal. “To have that kind of major activity going on, on both sides of the street, is incredible, and we are very grateful to David for choosing that site.”
You can’t miss the entrance to the Ben Thanh Plaza! An enormous red gate with Asian detail welcomes visitors. Once in the parking lot, you continue to see the influence of Dang’s Vietnamese heritage – from the lettering on the street signs, to a replica of an historic iconic temple in North Vietnam, even the plaza name itself. Ben Thanh Market is a large marketplace and tourist attraction in central Ho Chi Minh City, Vietnam.
Dang left Vietnam in 1978. He then moved to Malaysia, the Netherlands and finally immigrated to the United States in 1988. Dang lived in both New York and California before settling in Texas after buying his first store in Haltom City. In 2002, he bought a second store in Irving (which is now closed).
“It’s a great country to do business,” says Dang. “And Arlington is a great city, where there is a lot of opportunity for business.”
Dang believes Arlington offers positive thinking and positive policy for business people. He says he had his eyes on the east Arlington property for years. He first looked at it in 1991 but didn’t have enough funds to buy it at the time.
“I still remember. This location was a Home Depot. I had brokers searching for a location for my supermarket. After Home Depot left I made an offer …” recalls Dang. “So even though it was decades later, when this became available again we didn’t have much doubt; we picked it right away!”
Dang says the location was at the top of his list because a lot of Vietnamese live and do business in the corridor from Collins and Pioneer to New York and Pioneer.
Dang says it was his dream. “I share my dream, I share my experience, I share my heart with all of the people,” he says.
In 2014, the city launched its new brand, “The American Dream City.” According to its website, the brand reflects that Arlington is where many dreams start as aspirations that can turn into a reality and a better future.
David Dang embodies this brand. His dream became a reality. His dream also betters the future of the city. “The Ben Thanh Plaza offers beautification and revitalization of the area,” says Phillips. “David works with the Arlington Police Department, and he is always checking with them on safety [measures] that may be going on his property.”
The Ben Thanh Plaza is composed of three buildings, adding up to 175,000 square feet. There are more than 40 retail stores, a food court with seven restaurants and a bakery, and a central market offering an array of international foods.
Dang says the Plaza is set up like a mall to offer shoppers a unique experience.
And while the Plaza does cater primarily to Asian clientele, Dang says there are also Latino and American goods. He hopes to attract business from all populations of people.
Phillips hopes for the same, but not only for those who live here.
“We want it to be a destination location for visitors coming to our city,” she says.
Next month, from Feb. 9-11, Ben Thanh Plaza will be the site of a Chinese New Year celebration with live entertainment, a variety of food vendors and shopping. After that event, Dang says he will begin work on his next big project – a complete renovation of his Asian supermarket in Haltom City.