An essay for Mother’s Day 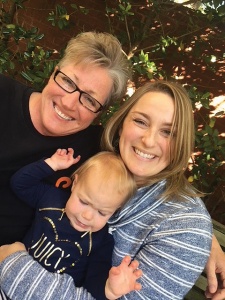 As an Obstetrician, I saw motherhood through the eyes of countless different women. Bringing babies into the world was my job, and I did a lot of it for over 30 years. Looking back, it is interesting how my perspective changed when I became a mother myself. My job just wasn’t so routine. Each day brought challenges and mostly happy endings. Even though every woman wants the perfect birth experience, something you come to understand after the baby arrives, is that the “birthing” is just the beginning.

Giving birth to a child is miraculous and ordinary at the same time. Being a trained obstetrician gave me methods and tools to deal with unpredictable circumstances. The role of motherhood was a pretty-much unproven ground. Who said parenting was easy? For me, it was like walking down a road with signs pointing in every direction and no idea of which one led to the correct destination.

I had good support from my equally inexperienced but supportive husband, our parents, my pediatrician, how-to guides, books, friends, and memories of my own childhood. But, every generation deals with new issues and directions.

When number two came along, we at least had a child-rearing map, rudimentary as it was.

As the years went by, the ministrations of motherhood began to slow down. Adolescents became adults and moved on to lead their own lives. Daily stresses became intermittent, and life slowed down a bit. Nightly family dinner became weekly Sunday dinner. A wise patient once told me, “Success as parent is when you cease being your child’s manager and become their consultant”… i.e.: you give advice only when asked.

So now comes a new generation, in the form of a granddaughter! Well, the parenting path is now familiar, but it is not my journey. In my role as Grandmother, I am just getting started being a regular consultant and reliable excursion guide. My patients have been telling me for years that the real joy in life is getting to be a Grandmother. Now, I know what they mean, and it turns out I may be pretty good at this!