Are you ready for some Esports?! 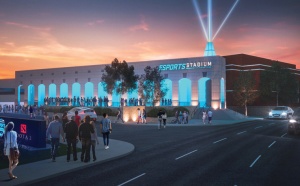 Late next month, the City of Arlington will unveil Esports Stadium Arlington, a state-of-the-art complex designed to draw competitive electronic game players and fans from around the world. The 100,000-square-foot venue, located at the site of Arlington Convention Center, will be the largest and most flexible esports stadium in the country. It is set to open its doors from Nov. 22-25, when the Season 6 Finals of FACEIT’s Esports Championship Series (ECS) is played here.

Tickets will be available for audiences to attend the last two days of the Finals.

ECS, founded by FACEIT and supported by YouTube, will begin its livestreamed regular season online from Oct. 3-Nov. 7, leading up to
the Finals. The four-day ECS Season 6 Finals will see the world’s top Counter-Strike: Global
Offensive (CS:GO) teams converge on the new Arlington attraction.

Some of you might be wondering, “huh?” about now, given that Esports are a relatively new form of competition and that they appeal to a predominantly younger crowd. But when Arlington officials began pondering a way to convert the aging convention center into something more modern and appealing to visitors – they were excited about the prospect of creating something new for something new. In addition, they saw a potential new kind of visitor for the city. That trifecta – to use a conventional sports term – helped convert the courting process that began last year between the City and Esports Venues, LLC, into a marriage.

Last March, Mayor Jeff Williams excitedly announced the City’s innovative venture with Esports Venues during a news conference at the convention center. “Being on the forefront of new ideas and setting trends is in our DNA and part of who we are as The American Dream City,” Williams said. “Esports Stadium Arlington will further cement our city’s status as a national and international tourist destination. Players and fans will come here for the tournaments, and they’ll stay even longer to experience everything Arlington has to offer.”

By collaborating with award-winning sports and entertainment architecture firm Populous, the City of Arlington and Esports Venues quickly began a $10 million renovation of the Arlington Convention Center to transform it into a stadium that offers the most immersive spectator experience in the live esports event market.

City Manager Trey Yelverton says the venue will be ready for that first event, but that parts of the complex will still be under construction. Ultimately, he says, Esports Stadium Arlington will offer technology that shatters the norm – think of streaming on steroids – which will hold appeal not only to the techno-savvy game players and fans, but to other groups that might want to use the venue for meetings or conventions.

“It will be dedicated to esports, but not exclusive,” Yelverton says. “The updated technology should hold appeal for all sorts of groups.”

Yelverton says the city likely will hold two Esports events in the first year of the stadium’s existence. “Then, the next year, we’ll host more,” he says. “It will start to grow as the sport is maturing.”

Lest you doubt that is going to happen, consider that the purse for the ECS next month will be from $4 million to $5 million. “The business model is robust,” Yelverton says. “It mostly features team sports, and the best teams play tournaments for prize money.”

Many of the players support their gaming endeavors by gathering followings on social media. “There’s a team called the Ninjas, who make about a half a million dollars a month from their Youtube channel,” Yelverton says.

He and other city officials are betting on those followers following the players straight to Arlington.