The transformation of Abram Street through Downtown Arlington is under way.

City, community and business leaders celebrated the start of the two-year rebuild project Monday morning with a groundbreaking ceremony near City Hall. The $26 million project will not only bring much-needed roadway and utilities improvements to Abram between Cooper and Collins streets. It will also add on-street parking, enhanced landscaping, public art and pedestrian amenities that aim to create a more vibrant, welcoming atmosphere for Downtown shoppers, diners and visitors.

“We are bigger than Cincinnati, St. Louis, Pittsburg, New Orleans. We deserve a downtown that’s representative of the 50th largest city in America,” Mayor Jeff Williams said during Monday’s groundbreaking event. “And this is a huge step in making this happen.”

Downtown is the final section of the voter-approved Abram Street Rebuild, which started at the Grand Prairie city limits east of SH 360 in July 2014 and has progressed west to Collins Street over the past three and a half years. 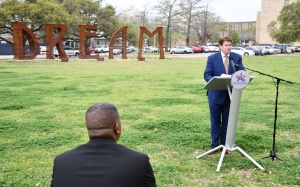 Improvements will include new water and sanitary sewer lines, paving, drainage, landscaping, streetlights, traffic signals and brick pavers that will create a plaza area in front of City Hall. The project will also include tree plantings, new benches and trash receptacles, and streetscape improvements, such as LED pedestrian lighting.

Retractable bollards, which are used to temporarily close a street to vehicle traffic, will be installed on Abram Street between City Hall and Founders Plaza, a public park that is also home to Levitt Pavilion Arlington. Enhanced electrical capabilities will also be added to provide support for the growing number of outdoor events held at the park.

“This rebuild will create a safer, more attractive space for on-street festivals and other outdoor events that draw visitors to Downtown, which is a state-designated Cultural District,” Williams said.

Though such progress will mean lane closures, dust and detours for the next two years, Downtown Arlington Management Corporation President and CEO Aldo Fritz asked for the community’s patience and support during what he called the “hold onto your hats Downtown Renaissance.” 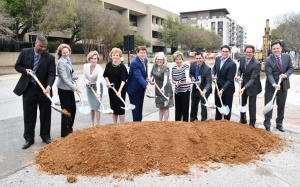 “Continue to bring your family, friends and coworkers to Downtown every chance you get,” Fritz said. “The welcome mat is out. Downtown Arlington is open for business.”

Arlington Chamber of Commerce President and CEO Michael Jacobson agreed, saying he expects the temporary inconveniences will be worth it for property owners, residents and visitors at the project’s end.

“Don’t stay away from Downtown. You may have to take a little detour to get around whatever construction is going on but don’t let that slow you down,” Jacobson said. “The businesses down here need you.”

As an incentive to complete the project ahead of schedule, the Council approved a $4,000 bonus for each day that the project is finished early, with a maximum total bonus of about $1.4 million.

The City of Arlington, which recently launched the Abram Street Rebuild webpage, will work closely with the Downtown Arlington Management Corporation and other community stakeholders to communicate lane closures, construction milestones and other important information.

“Whenever you go to rebuild a street through the heart of your community, it’s hard. But we work together, and we will overcome the hurdles,” Williams said.

Additionally, Arlington has partnered with Waze to give drivers the best experience possible to get around town. Drivers can download Waze for free at www.waze.com/get for iOS and Android and see real-time traffic, find optimal routes, avoid road closures and more. 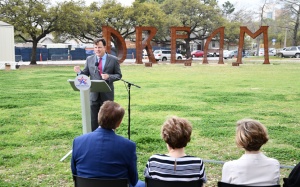