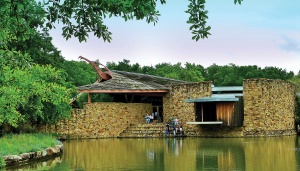 Editor’s note: This month’s Finish Line is one in an occasional series that former Mayor Greene calls “How our community was shaped by 10 things that didn’t happen.” This month’s commentary is the seventh of those 10 things.

The city’s largest and most popular park encompasses the Trinity River forest flood plain and stretches along more than eight miles of paved trails from the eastern edge of the city to its western boundary. Here you will find the Trinity much different than the way you see it when you drive across it on the bridges found throughout the expanse of the Dallas-Fort Worth region.

But it wasn’t always possible to experience this treasure trove of wildlife, woodlands and waterways. Until the late 1980s Arlington owned only a couple hundred acres of inaccessible North Arlington land along the roadway that is today’s Green Oaks Boulevard.

You may not know her name, but Arlington is very fortunate indeed to have had Donna Brasher as our parks department director, thinking beyond the usual budget restrictions in addressing the city’s scarcity of parkland and green spaces.

Without much success in getting anyone sufficiently motivated for a big private fundraising assignment, in 1987 she decided to approach Arlington’s First Lady, believing she might be able to get things moving.

At first, Sylvia Greene was reticent. She told Donna that she had little experience in asking people for money. Donna’s response was to the point: “You are the mayor’s wife, and you will be surprised how people will react when it’s you sitting across their desks describing how much the community needs their help.”

The River Legacy Foundation was formed as a non-profit corporation, a board of directors assembled, Sylvia was named president, and the work to make something special happen was underway. Next came the fundraising challenge. With a visionary master plan to help people see the possibilities in hand, contributions were obtained from individuals, charitable foundations and corporate donors.

In June, 1990, the first phase of River Legacy Park was complete and open to the public. The next phase was already underway, and collaborations with area, state and federal partners were growing and producing significant results to ensure it would all become a reality.

Today the park encompasses almost 1,400 acres, including those eight miles of paved trails along the Trinity, picnic areas, a nature-themed playground and a popular pavilion where meetings, weddings, and events are staged.

Then the crown jewel of the park was imagined. At first the idea was to find a way to build a nature center that would be a place to pick up a trail map and set out to explore the park.

Sylvia and her supporters had something more in mind. Much more.

When that vision was drawn up and presented to the city council, the reaction was both enthusiastic and yet pessimistic at the same time. What a wonderful thing this could be, “but we don’t have the money” was the essence of the response.

Sylvia and her foundation team said, “Fine, we’ll start with the $500,000 in bond funds already committed and increase it tenfold with money from the private sector.”

It took lots of 12-hour days stretching over many months of revisiting and sharing the vision with previous donors, recruiting new ones, and a spirit of never giving up. Moreover, Sylvia’s team was following the inspiration of Margaret Mead.

“Never doubt,” she famously said, “that a small group of thoughtful, committed citizens can change the world; indeed, it’s the only thing that ever has.”

That small group of River Legacy Foundation’s thoughtful, committed leaders raised all the money they had promised to the doubting city council who stood in the reflected glory of those citizens on the day in 1996 when the doors to the new and amazing River Legacy Living Science Center were opened to the public.

So, the thing that didn’t happen to make all this possible was that Sylvia Greene didn’t say “no” to Donna Brasher and then spent the next 15 years meeting and exceeding expectations and overcoming the doubts of those who didn’t believe.

The result was a $5 million gift to the City from that small group of committed citizens.
Twenty years later, a $2.5 million transformation of the experience inside the nature center has taken place. You ought to come see it. And, bring the kids. It’s awesome.