by Richard Greene
in Community
0 0
0 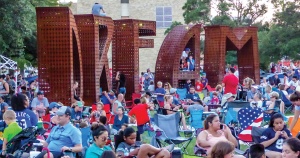 Radio DJs coined a popular refrain when their station was going to play one popular hit record after another – “And the hits just keep on coming.” It means one good thing after another is happening.

We live in a part of the country where that phrase has a whole different meaning. It can easily be applied when looking over the latest population numbers for our city, region and the great state we call home.

Texas is again the fastest growing of all the states. Our numbers increase by about one thousand persons every day. Yes, every day. That means Texas has grown during 2018 equivalent to a city almost the size of Arlington.

When adding up the combined residents of the four states that surround Texas, you come up with about half our population, which is approaching the 29 million mark that will be achieved before this year’s end. We’ll likely hit the 30 million within the next two or three years.

Closer to home the numbers are even more awesome. Our urban region is the fourth largest in the country and, with a current population nearing 7.5 million, the fastest growing of them all. Only the metropolitan regions of New York, Los Angeles and Chicago are larger than ours.

Then there’s a distinction for Tarrant County not matched anywhere else in the state. We are the only county with two cities the size of Fort Worth and Arlington.

Here’s another way to relate to the size of Arlington, now the country’s 47th largest city – take this pop quiz and see if you know the answer:

What do all the following well-known cities have in common? – New Orleans, Tulsa, Cleveland, Tampa, Honolulu, St. Louis, Pittsburgh, Cincinnati, Orlando – and the list goes on.

Answers are at the end of this story – no peeking while you ponder if you know.

Of the nation’s 25 largest cities, six of them are in Texas. No other state has as many on that list. California has only four, and New York has but one.

Among those three metropolitan areas larger than ours, their growth rates since the 2010 census have come nowhere close to ours that exceeds 15 percent. New York’s is less than four percent, about the same as Los Angeles and Chicago is less than one percent, on the verge of decreasing.

The entire state of New York actually saw the largest population decrease, losing more than 48,000 people, followed by Illinois with a loss of more than 45,000.

For the same five-year period, an estimated 542,432 more Americans moved to Texas than moved out.

The Forbes report concluded that it is Texas’ strong job market and economy that sustains “the state’s vibrant population growth.”

A year from now we all will be counted again. The results of the 2020 census are expected to provide Texas increased power in Washington with three more seats in the U. S. House of Representatives.

Okay, here are the answers to those two questions:

The first list is of cities with fewer residents than Arlington. Many who see these familiar cities just presume they are larger than ours. That surprises a lot of people.

The second is a list of cities less than half the size of Arlington.

Here’s another factoid that people don’t usually think about: 24 states in the country don’t have a city with as large a population as Arlington.

Our greatest advantage of being centrally located between the big cities to our East and West has always denied us the visibility that so many smaller cities around the country enjoy.

Nevertheless, considering all the dynamics of this great region, we wouldn’t trade places with any other city anywhere in the land.