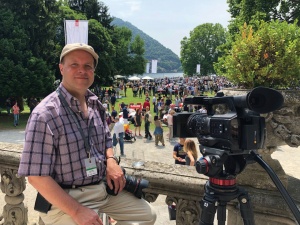 With this month’s focus on the backbone of our local economy – the small businesses of our community – it occurred to me that I might share my connection to a local businessman’s journey to success that is very close to home.

Brian Greene, my and Sylvia’s son, discovered his enthusiasm for film and video production beginning in the fifth grade with the making of a First Aid video for a scouting merit badge. That passion continued through junior high, where he became known as the school’s “video man.”

My thoughts were that it was a temporary interest that would run its course in a year or two, and he would be on to something else.

I should have realized the error of that supposition when he and a Gunn Jr. High School classmate produced a supply of business cards offering to film “graduations, weddings, and births.” Their target audience was immediately at hand, as they were surrounded by large numbers of fellow students whose families could use such services.

The birth part of their offer was perhaps an overreach, but entrepreneurs have a tendency for doing that.

In any event, instead of his interest in the field fading away, it only grew as he made his way through Baylor University. At first, he was working on a business curriculum – a decision that would serve his future – then he transferred into the school’s telecommunication program and got his degree there.

Soon he would become a pioneer in the development of the new technology of high-definition television and, in 1995, launch his own company, Greene HD Productions, Inc.

Working with the new industry’s mega cameras, computers, and magical editing software, he marketed his services with skills to produce programming from concept to completion. Among his earliest work was the first-ever high-definition theater-in-motion featuring the Trinity River Raft Ride attraction at River Legacy’s Living Science Center.

Soon he was turning out television projects that included the first true high-definition programming for Discovery HD Theater. That led to his first Emmy nomination in 2001.

He started picking up Telly Awards – the industry’s trophies that honor excellence in video and television across all screens.

Today his work has garnered more than a dozen of them that fill the shelves in his Arlington office.

Discovery HD Theater transitioned in 2011 into the Velocity Channel, where three of his television series ran for two years, with one of them scoring the broadcaster’s highest-ever daytime ratings among all their shows. In addition to domestic markets, his work has been featured on the BBC in Great Britain, NHK in Japan, and broadcasters in Europe, Australia, and Asia.

In 2007, working with the Marathon Motor Coach company, he built a 12-camera mobile production unit that was a departure from the traditional truck units being used in the industry. Clients were able to record straight to disk and edit while in motion (a first in the trade), all while in the air-conditioned comfort of a luxury studio on wheels.

For that breakthrough in mobile production technology, he won two Best of Show Awards at annual conventions of the National Association of Broadcasters.

Currently under production are two seasons of 13 episodes each of a new television series that will debut as “Road to Provenance.” An apt title, that means a record of ownership of a work of art or an antique, used as a guide to authenticity or quality. It’s all about the most revered private collections of the rarest automobiles in the world.

The series provides a look into the lives of car enthusiasts as they share stories of their journeys, their cars and why they collect the Best of the Best – an actual title that is awarded to the winning vehicle selected from the best of show winners at the most prestigious concours d’elegance events around the world.

Already in its second year of production, the work has taken Brian to eight countries filming episodes that feature the lifestyles of collectors and owners of the cars that connect them to the art form often found in the world’s finest automotive museums.

An example of the kind of amazing vehicles featured in the series is the winner of this year’s Best of the Best – a 1937 Alfa Romeo 8C 2900B Berlinetta, one of the most prestigious cars in the world. Only five were built, and one of its siblings was auctioned last month for more than $16 million.

Programming is set to air on the History Channel later this year. Brian’s long-time business partner and Arlington classic car collector, Mike Ames, and their Dallas associate, John Ridings Lee, are the co-producers of the series.

A local business with an international flavor and a couple of proud parents.

Richard Greene served as Arlington’s mayor from 1987-1997 and currently teaches in the University of Texas at Arlington’s graduate program in the College of Architecture, Planning and Public Affairs.