by ArlingtonToday Magazine
in Business and Education, Community, People, Wellness
0 0
0 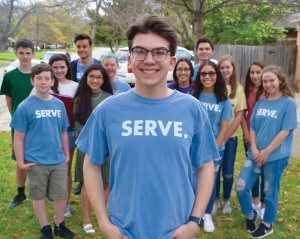 For a six-year-old to extend genuine empathy to a peer is admirable, though hardly unusual, which means it wasn’t all that foreign when Carson Bold witnessed the living conditions of children at SafeHaven – from the vantage point of a comfy existence in Central Arlington – and saw it as downright unbearable.

SafeHaven is the Tarrant County family violence agency that provides a safety net for families fleeing domestic violent situations by offering, among other support, no-cost emergency and long-term shelters.

The shelters are life-saving refuges for those seeking safety and solace, but it is still a shelter: cramped, little privacy, uncertainty of tomorrow. This new life can be quite a blow – especially for children; one day they are playing in their own backyard, the next confined to a communal environment.

Carson noticed the lingering sadness of those children when he participated in the agency’s Camp Heart, three days of outdoor activities to help give children some normalcy. He wanted to help. So he did what most six-year-olds would do: set up a lemonade stand to raise money.

Carson promptly handed it over to SafeHaven, where his mother was children’s program coordinator. SafeHaven found the gesture touching, gladly accepting his funds with a brief presentation in the administrative office.
They figured that was that. How wrong they were.

As Carson grew older his affinity for helping others turned into a kind of obsession. The more he did the more he wanted to do. Kind of surprising since this fervor for service countered that of the typical wayward teen. This isn’t a knock on Carson, but an acknowledgement of the what’s-in-it-for-me wiring of the teenage brain.
Yet it never seemed to happen.

By the time Carson was at Joe Bailey Junior High School, the Lemonade Stand expanded to include a yard sale, bringing in enough to help pay for kids to attend Camp Heart. Every dollar that came in went right back out. When Carson won $1,000 for Disney Family Magazine’s Kids Who Care contest, for example, the money went straight to SafeHaven.

By this time, Carson Cares had established A Season of Giving event where volunteers assembled Operation Christmas Child Boxes filled with toys and other necessities to be shipped globally to impoverished areas. The project grew from a handful of volunteers completing 33 boxes to 200 people completing 500.

Now 18, Carson remains the lifeblood of this non-profit that has become as ubiquitous to service as, say, Mission Arlington. Yet what distinguishes the non-profit is its ability to make young volunteer disciples.

“The starting point was always to get other kids involved in giving back to the community,” Carson says of the group’s mission statement, “Teaching Kids How to Help Others.” Carson is vigilant about showing what volunteer opportunities are available and giving his peers room to develop projects on their own.

The Bolds didn’t just participate in a neighborhood Fall Festival. They set up a table promoting community and local agency volunteer needs. So it’s not just about volunteering for Carson Cares. It’s about volunteering, period.

Carson Cares’ objective is twofold. One: share the importance of giving back. Two: have fun.

Arlington High School Principal Shahveer Dhalla says of Carson, who initiated the “Cans that Count” food drive collecting over 2,000 cans for the North Texas Food Bank, “He is so great at using the resources around him to impact others.”

In fact, Carson Cares’ legacy could very well be the development of a whole generation of altruistic endeavors.

Sam Whipple is only 12 and has been with Carson Cares “for as long as I can remember.” His mother is a family friend who dragged him to service events. Now he comes on his own.

“Volunteering opens your eyes,” Sam says. “It shows that there are people who really need your help.”

One Sunday in March, Sam joined a dozen other teenagers at the Bold home to make sandwiches for residents of the Arlington Life Shelter. The students were part of Carson Cares’ campaign SERVE, where volunteers support organizations like the Women’s Center, Arlington Pregnancy Center, the Alliance for Children, or to simply visit with residents of an assisted living center.

Watching them work together represented Carson’s view of volunteerism: talking, joking, laughing – getting it done.

Carson Cares volunteer ranks grow because of that environment. Volunteers often return for projects with friends.

Arlington High senior Isaac James joined because he wanted to improve leadership skills. “Then,” says Isaac, “when you see tangible evidence of making a difference in people’s lives, you see the positive effects. Everyone wins.”

You don’t have to dig deep to see where Carson gets this altruistic ways. His mother, Lashaunn Bold, a Social Work professor at UTA, laid such a foundation. This is a family that used to throw a big Halloween festival in their front lawn. She is the epitome of a keen administrator; there isn’t a question she can’t answer, and she seems to know where everything is – or should be. She’s documented the Carson Cares story in a self-published book, “The ABC’s of Lemon Aid: The Story of a Family that Goes the Extra Mile to Make the World a Better Place.”

“You have to credit Pantego Christian Academy where he received a foundation of being a loving person,” says Bold. “He also has this personality that sees when others are being mistreated. He’s always been more of a listener and sees things differently.”

Bringing on a Youth Advisory Board was to ensure the future for Carson Cares. There was a learning curve for Carson, who wore multiple hats. Now, he says, “We have some really good leaders.”

When member Emma Ruby wanted to supply shelter students with mums for homecoming, Carson at first balked, questioning its significance. Emma knew some considered mums “silly and trivial” but also knew the pull of this Texas tradition and that students in transition wouldn’t be able to afford them.

The mum idea went well. It thrilled the students and had a profound effect on Emma.

“It was one of the more rewarding experiences of my life,” Emma says of watching her idea take shape. It propelled her to want to do more, which, Carson would say, is the idea.

Carson himself is an introspective sort who looks like he’s always figuring something out. He lets others have their say and then weighs in.

Emma, who met Carson as a fifth grader, describes him as fiercely loyal, doing whatever is in his power to help, and not just with children or adults at a shelter.

“If I tell him I’m struggling with a personal issue he says, ‘let’s go to the coffee shop and talk about it,’” Emma says. “He seems to see every challenge as this personal thing.”

Both son and mother are confident that Carson Cares will continue without the day-to-day massaging of Carson, who will most likely attend Southern Methodist University in the fall.

“Not too far,” Carson says of SMU. “I plan on having a big hand in this still.”
That’s hardly a shocker.