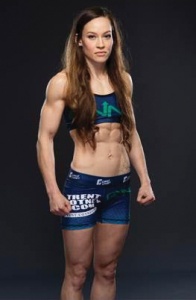 By day, Jinh Yu Frey is a dedicated nuclear medicine technologist in the Radiology Department at Medical City Arlington. After hours, though, is where you might have heard of her. Frey is the No. 1 ranked atom weight in the nation by Invicta Fighting Championships, the world’s largest all-women’s mixed martial arts organization.
By the time you read this, she might even hold a more impressive distinction. At press time she was preparing for a late-December fight against Korea’s Ham Seo-Hee, the reigning atomweight world champ, with the winner getting to claim she’s the best in a business sporting many good fighters.
Frey took up the sport 10 years ago and quickly discovered that “I really enjoy hitting people in the face.” She says she’s joking after uttering those words, but she’s only barely smiling.
Initially, Frey trained as a boxer primarily for fitness reasons, but the more she worked out, the more she became enamored with the prospect of an MMA career. Her husband Douglas, a former competitive wrestler, worked with her on her technique in that discipline, and she launched her career in 2013.
“I thought I’d just do this until I finished grad school,” she says. Now, after earning a national championship belt just eight fights into a professional career (where her record is 6-2), she is on the brink of making history.
Frey trains six days a week, three hours each day when preparing for a fight. Because her normal weight is 123, she has to mix a nutritious diet with the road and gym work to get to the atomweight limit of 108. Again, Douglas plays an important role; professionally, he’s a nutritionist. Her “fighting” diet consists of 60 to 70 percent vegetables, along with four ounces of protein for each meal. 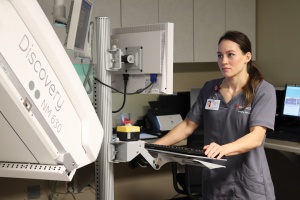 Frey wound up in Arlington and at Medical City Arlington when Douglas staked his professional career here. She grew up in Amarillo and graduated from high school in three years in the top two percent of her class and achieved summa cum laude honors for each of her three college degrees, including an MBA from the University of Texas at Arlington.
“Sometimes I think we’re underestimated. [People think] that fighters are not really smart and can’t do anything else,” says Frey. “There are actually a lot of highly educated fighters out there.”
Her fans at ringside aren’t the only people celebrating Frey’s success. Her supervisor at Medical Center Arlington says she is a joy to work with because of the passion she brings to the job. “We’re very fortunate to have Jinh on our team at Medical City Arlington,” says Tim Everidge, Director of Radiology. “Nuclear medicine technology requires a great amount of skill and knowledge, and Jinh does an outstanding job with our patients.”