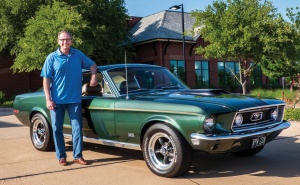 The National Muscle Car Association is hosting the 50th anniversary of Ford’s iconic Cobra Jet at a big extravaganza in Ohio later this summer. They bill the event as a celebration of Cobra Jet heritage in “a snake pit where fangs come out and venom will pump through your veins as participants fill it up with a sea of colors, chrome and high horsepower.”
However, local enthusiasts won’t have so far to journey to mark the big anniversary, as it will all be on display at Arlington’s own extravaganza.
This year’s Yellow Rose Classic Car Show takes center stage at the Arlington Convention Center on July 7-8. 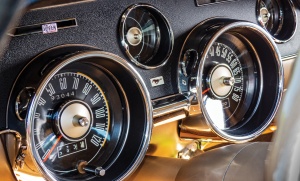 One of the finest examples of the first generation of Ford’s pony car will be on display as Tom Egan arrives with this wildly popular 1968 Fastback GT version of one of the renowned Mustangs from the car’s earliest era.
Tom may qualify as one of the country’s premier Mustang devotees. He owns 15 of them, including five Cobra Jets, ranging just from the model years of 1967 to 1970.
I asked him what first got him interested in collecting Mustangs, and his answer was typical of youngsters coming of age when discovering the wonders of the automobile. 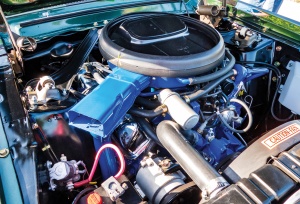 “My dad had one of these, and he let me sit on the center console and shift the ‘four on the floor’ gears,” he says. “I was hooked right then and still am.”
Among Tom’s collection, of course, is one just like his father’s 1970 Mustang Mach 1. It brings back those childhood memories every time he sits behind the wheel and does the shifting from the more conventional location.
But, this Highland Green beauty was his first acquisition. “I have it equipped with the pinnacle of performance – the big block Cobra Jet 428 engine that was offered as a mid-year option,” he says.
It was rated by Ford at 335 horsepower, but aficionados say that claim was nothing more than a ploy to distract the National Hot Rod Association from the engine’s true ability in hopes of getting more advantageous classifications in stock and super stock competition. 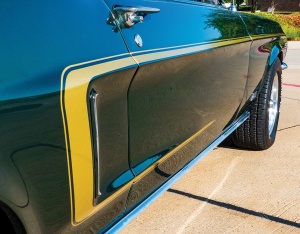 Some reports say the car is capable of speeds of 160 mph, and maybe more. Tom’s driving record, however, is spotless. He has never gotten a moving violation or been in an accident.
The Mustang Fastback, with GT options of front fog lamps, the side “C” stripe, black scoop and hood stripe, sold new in 1968 for about $3,000. Today, one like Tom’s is valued well into six figures. The exact selling price is unlikely to be known since his is not for sale even though he frequently gets offers. He also long ago ran out of room for the trophies his Mustangs have accumulated from all kinds of car shows and competitions around the region. He has had his cars in Arlington’s Yellow Rose show for the past 14 years and won an award every time.
This year’s anniversary show is very likely to produce another victory for him.
In addition to the Cobra Jets, the event will feature models ranging from the Shelby GT500KR, the Torino, and the ones made famous by Lieutenant Frank Bullitt in the 1968 film bearing his name. 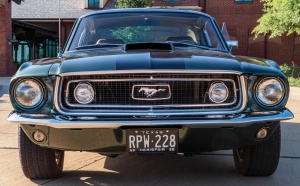 You will also be able to enjoy the showcasing of the history of the F-Series Ford Trucks that will be on display along with the cars.
The North Texas Mustang Club hosts the show that benefits the Scottish Rite Hospital. Admission is $12; kids 12 and under are free. It runs from 10 a.m. – 9 p.m. on Saturday and from 10 a.m. – 6 p.m. on Sunday.