With its sleek styling and powerful 600-horsepower Corvette engine, this classic car has both “driveway appeal” and “road cred.”

If you heard this car coming before you saw it, the likely unguarded response would be for your jaw to drop open and then say something like “how could that be?”

Then, its owner, Ryan Gruber, would explain: “Yeah, that sound you hear coming from under the hood is not the way the car came equipped in 1954.”

Chevrolet engineers put a 215-cubic-inch, 92-horsepower engine in the line of its cars considered revolutionary at the time as it set the pace for the legendary Bel Air that would evolve over the next few decades. 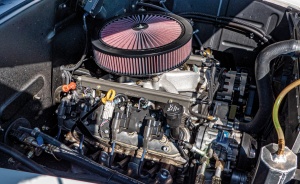 With its 3-speed manual transmission, the car could deliver speeds of 60 miles per hour – plenty for the country’s highways of the day. But, for Ryan, he wanted more when he finally found what he was looking for some 16 years ago.

“My first intentions were to chop the top, paint it flat black, and turn it into a hot rod,” he says. “Instead, realizing it was one of 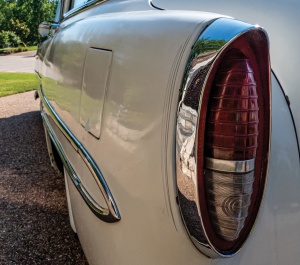 only a few white ones around, I changed my mind.”

After switching out three motors, two transmissions and two rear ends, he finally came up with what he has today.

And, it’s way cool. To say the least.

Now it’s souped-up with a Corvette LS, small-block, six-liter, fuel-injected V8 aluminum engine producing 600 horse power that can make the car go maybe twice as fast as it could coming off the assembly line 65 years ago.

As you might expect, Ryan spent some time at the famed Kennedale Speedway Park before drag racing there came to an end two years ago.

Sharing his experience, he describes his early encounter at the track. “The car does not look like it, but it is very quick on the track and has embarrassed a lot of other racers,” he says. “I planned to put slick, drag racing tires on it to make it a little quicker on the track. I was told if I wanted to get it going a bit faster I would not be allowed to race without a roll bar.”

His mechanic, Nathan Hale of Hale’s Speed Shop in Lewisville, who specializes in cars of the mid-’50s, completed the drivetrain and suspension work for him. The addition of an air ride suspension system makes it possible to adjust both the car’s height and overall experience for driver and passengers alike.

Whenever he brings it home from Hale’s after work has been done, his wife, former Dalworthington Gardens mayor and current Tarrant County District Judge, Kimberly Fitzpatrick, has a now predictable reaction. “It looks just the same as when it left,” she declares, and Ryan just smiles. 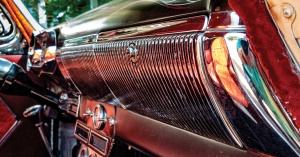 But, in addition to adding to the car’s power performance, the luxury seating – something else unheard of in 1954 – helps to transform it into as comfortable a ride as any of today’s modern vehicles.

As a result, he drives it weekly, and, along with power steering, automatic transmission and air conditioning, his wife and two daughters can enjoy the experience of cruising around with him and watch people turning their heads as they discover a car that is really different from all the others. 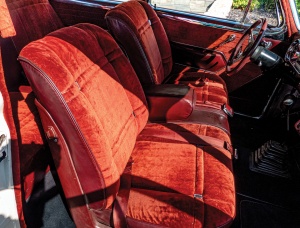 The 1954 Bel Air was part of the first generation of the premium model of cars in the General Motors family. It was advertised as “entirely new through and through,” with restyled body panels, front and rear ends.

It paved the way for the introduction of the 1955-57 range of cars that really established the Bel Air as a cultural icon.

With its curved, one-piece windshield, wide chrome strip of molding from the rear fender bulge to the rear bumper, the styling sets it off as somewhat of a transition from the art deco era with elements you can identify with a closer look.

The interior has a massive expanse of chrome across the dashboard and for the 1954 model, a revised grille and taillights.

You could get the car as a convertible, hardtop coupe and two- and four-door sedan. But if you wanted to turn heads with the characteristic throaty sound of racecars, you would have to wait a few years to have one like Ryan Gruber’s.