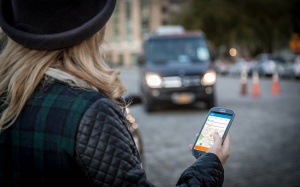 Arlington will launch a new, innovative transportation pilot project this December to help residents, workers, students and visitors get around the city by booking a shared ride for a flat-rate fee.
On Tuesday, the Arlington City Council approved a contract with Via to develop and operate an on-demand rideshare program that will provide service to select areas of the city during a one-year pilot project. Customers will be able to book a seat in a premium shared vehicle through the Via app or by dial-in phone number, and Via’s sophisticated technology will match them with others going their way. This project, which was supported by the citizen-led Transportation Advisory Committee, aligns with the Arlington City Council’s Put Technology to Work and Enhance Regional Mobility priorities.
“This is an opportunity for us to try Via’s innovative transportation system that will offer our residents and visitors a cost-effective way to get around the City,” Arlington Mayor Jeff Williams said. “Via’s unique rideshare concept received tremendous support from our Transportation Advisory Committee and it is one of the first projects the committee recommended Arlington try as a near-term transportation solution.”
First launched in New York City in September 2013, Via currently operates in New York City, Chicago, and Washington, D.C., providing more than 1.5 million rides per month, and is growing rapidly. Via also licenses its revolutionary on-demand transit technology to transportation operators globally.
“In the city of the future, everyone will be getting around in dynamically-routed shared vehicles,” said Daniel Ramot, Co-founder and CEO of Via. “We are excited to partner with the City of Arlington to provide the first comprehensive on-demand public transit service to help residents and visitors get around the city in an affordable, convenient, and efficient way.”
The proposed rideshare service, set to begin December 11, will be available Monday through Saturday with service hours varying based on the day of the week. Transportation will be available to destinations within select services areas. Accessible vehicles will also be available for riders with disabilities.
Riders will pay a flat per trip fee, estimated to be $3 when the service launches. Rider fees will be used to support or grow the rideshare service.
The rideshare program will initially serve the Trinity Railway Express (TRE) CentrePort/DFW Airport commuter rail station, Downtown Arlington and east-central Arlington, which includes places such as Texas Health Arlington Memorial Hospital and other medical offices, grocery and retail stores, restaurants and entertainment venues.
The service area is expected to expand early next year to include key destinations such as the University of Texas at Arlington, the Parks Mall, the Arlington Highlands shopping center and surrounding areas. Service areas may shift over time as information is gathered about demand for service. Up-to-date service area maps will always be available through the free Via app or the Via website at www.ridewithvia.com.
Up to 10 vans that seat six passengers each will be available to pick up riders during the pilot program, with the ability to add additional vehicles based on demand. Via drivers will undergo an extensive background check.
During the start-up period, Via is expected to be available roughly between 7 a.m. and 9 p.m. Monday through Friday, with Saturday hours starting later in the morning and extending further into the evening. Service hours may change based on demand. Current hours will always be available in the app and on Via’s website.
The City of Arlington will contribute approximately one third of the project cost, in the amount of $322,500, with the remainder coming from the Federal Transit Administration. The contract period is for one-year, with four one-year renewal options. Data collected through the rideshare service will help shape the City Council’s future transportation planning decisions.
The rideshare pilot program will replace the Metro ArlingtonXpress, or MAX, commuter bus service, which ends Dec. 31.

posted by Office of Communication