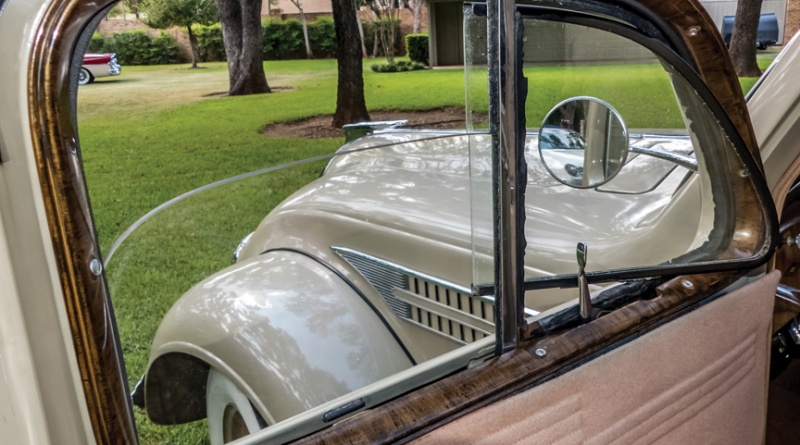 When the Chrysler Corporation produced what they said was the safest automobile ever built in 1934, they backed up their claim with an extraordinary demonstration of the strength of its breakthrough unit-body steel construction.

They took the car to the top of a 10-story cliff and shoved it off. It tumbled end over end and landed right side up on its tires. Immediately, a guy walked over to it, opened the driver’s side door, sat down behind the steering wheel, and drove it away.

Among the car’s other distinctions there were these “firsts” achieved upon its arrival at dealerships across the country: first to have an automatic overdrive, first of all-steel construction, first to have the engine mounted over the front axle instead of behind it, first to carry rear seat passengers in front of the rear axle, and one of the first designed in a wind tunnel with Orville Wright as the consultant.

The reason it’s likely you haven’t seen one of these cars is not just because they were built more than 80 years ago, it’s a story of bad timing and a reputation that it did not deserve.

We get the explanation from Chandler Smith, who owns this 1936 Airflow C-10 sedan that is the focus of this month’s car feature story. “Airflows were popular with pilots, celebrities, and those who considered themselves forward-thinking and technologically sophisticated,” he says. “The Airflow did not sell well. Unattractive styling? Too far ahead of its time? Not exactly. When the Airflow debuted in 1934 at the New York Auto Show to mark the 10th anniversary of Chrysler Corporation, hundreds of people placed orders on the spot, so they must have liked it.

“But back at the assembly plant, where it was rushed into production to meet the anniversary deadline, they were still sorting out how to get this first-ever unit-body chassis around a structural pillar in the factory (they eventually had to tip the cars on their sides to round the tight corner), and some fit-and-finish issues plagued this all-new construction concept.

“Auto Show purchasers had to wait almost four months before the first Airflows were delivered, which gave Ford and GM time to spread rumors that the cars were ill-conceived, unsafe, and unreliable, all of which were untrue.

“Still, people canceled their orders and bought Pontiacs and Fords, and the Airflow never recovered from this misinformation, even despite Chrysler’s legendary film to prove the car’s structural integrity.

“Plus, it was an expensive car in the middle of the Depression, so Chrysler’s revolutionary baby was only produced for four years (1934-37) and nearly bankrupted the company. Yet, it is a comfortable, reliable, fast, overbuilt, well-engineered automobile that is at home even in 21st-century traffic with no modifications.”

Chandler’s car has about 110,000 original miles on it. It was first delivered to Riverside, Calif., into the hands of a man who had owned a Model T and then a Model A before receiving this big, heavy and fast automobile.

It was too much car for him – he hated it. He was invited to drive it in a stretch of the opening procession of the Pan American Highway from Vancouver to Mexico City, during which he had two flat tires.

It was impossible to find the correct size, so they put on what they could find. It then handled so badly and was such an embarrassment that he retired the car to his ranch in Ridgecrest, Calif., where his sons occasionally drove it on the desert highways up to 95 mph, and they said it still had more to give. They later sold it to a man who 10 years later sold it to his cousin who eventually restored it faithfully to factory specs in 1983. He drove it sparingly and always garaged it.

Chandler acquired it in 2003, and in just the past 13 years he has driven it without incident on round trips from Fort Worth to Fredericksburg, Amarillo and Canadian in Texas, as well as to Bartlesville, Okla., Eureka Springs, Ark., Reno, Nev., Saint Joseph, Mo., Lexington, Ky., Durango, Colo., Dayton, Ohio, Springfield, Mo, and Baltimore, Md.

And it still wins trophies at national meets – including Best of Show!

The Chrysler Airflow – proclaimed by Walter Chrysler himself as “The first real motorcar since the invention of the automobile.”