by ArlingtonToday Magazine
in Business and Education, People
0 0
0 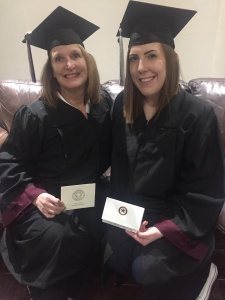 Sandy Gregory doesn’t have to worry about getting a good seat at her daughter’s college graduation. She’ll be on the floor of Kitty Magee Arena with her, picking up her own bachelor’s degree from Texas Woman’s University.
Gregory, 62, hadn’t planned to return to college until her daughter, Leianne Babaa, 35, started thinking about it.
“I’ve worked since I was 16,” the Arlington resident says. “Something was missing. I always wanted to get it, but I wouldn’t have gone back if it wasn’t for Leianne. It was more of a support role.”
Gregory has worked for Comet Cleaners’ corporate office for the past 27 years and doesn’t plan to leave. But having a bachelor’s degree doesn’t hurt, she says.
For Babaa, who lives in Mansfield, the need was more pressing.
“My stepson was graduating from Legacy High School in 2017,” she says. “I said, ‘no way he’s getting his college degree before me!’”
She has worked at Timberview High School as an administrative assistant for the past two and a half years, but wants to go into human resources.
Both attended college before. Gregory graduated from the Fort Worth School of Business after finishing school at Western Hills High in 1973. She got her associate’s degree in mid-management from Tarrant County Junior College (now TCC) in the ‘70s, and took a few classes at the University of Texas at Arlington in the ‘80s, but did not finish her degree.
Babaa was a home school graduate in 2000, then headed to TCC. She got married and started having children before she could finish.
The mother-daughter team set out together in fall 2016, taking classes from TCC and Texas Woman’s University simultaneously.
“We were taking up to 24 hours at a time (in addition to working),” Gregory says. “I had to go back to TCC to get core complete.”
The pair took weekend, night and online classes from a variety of campuses. Babaa took math at TCC Southeast, and Gregory took biology at TCC Northeast. Microeconomics was at TCC’s Trinity River campus. All their TWU classes were online, as were most of the TCC classes, so that cut down on travel time. “We were determined!” Babaa proclaims.
And they weren’t messing around. Both were on the Chancellor’s List (4.0 GPA) at TWU last fall and the past spring, and they’re on track to do it again this fall. Gregory will graduate magna cum laude with a 3.88 GPA, while Babaa’s 3.4 GPA just misses cum laude.
“I am so mad at myself,” Babaa says. “If I hadn’t messed up before, we both would be summa cum laude.”
Both have student loans in excess of $20,000, but say that it has been worth it.
“It means a much better career opportunity,” Babaa says. “Plus, I feel like it’s being a role model for my kids.”
Gregory says she doesn’t know what she’s going to do with the degree, but she’s proud to have it.
“Her dad asked me, ‘You’re not going to walk across the stage, are you?’” Gregory says. “I said ‘Why not? I’ve earned it.’”
On Dec. 16, Babaa will receive a bachelor’s degree in senior human resource management, and Gregory will take home a bachelor’s in business administration.
So what’s next? Masters degrees?
“We may want to take a semester off,” Gregory says.
“She’s so funny,” Babaa replies.