Celebrate Independence Day in Downtown Arlington with live music, kid-friendly activities and a spectacular firework display on Tuesday, July 3 followed by a red, white and blue, fun-filled parade the next day.

Festivities start at 6 p.m. July 3 at Parks and Recreation Department’s 12th annual Light Up Arlington. This year’s celebration, which encompasses several blocks north and south of City Hall and the new George W. Hawkes Downtown Library, includes some of the top musical acts in the Dallas-Fort Worth region, vendors, concessions, food trucks and plenty of kid-friendly fun. Bands will perform at multiple stages around Downtown, including the Levitt Pavilion.

Pony rides, train rides, a petting zoo and inflatable games are just some of the activities planned for the little ones.

The fireworks display, which lasts about 20 minutes, starts at 9:45 p.m. and will be set to music from 95.9 The Ranch. Because of construction around City Hall, fireworks will be shot off from the Municipal Office Tower at 101 Mesquite St. 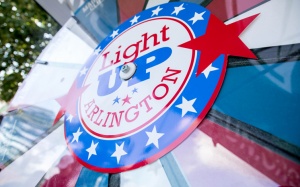 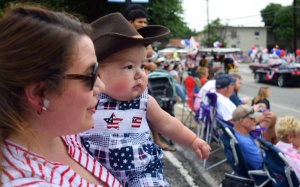 Light Up Arlington isn’t the only way to celebrate Independence Day in The American Dream City. Head on back to Downtown on Wednesday morning for the Arlington 4th of July Parade, billed as the oldest, longest running event in the city.

The theme for this year’s patriotic parade, which runs from about 9 a.m. to 11 a.m., is “Star Spangled Independence Day” and is dedicated to “the heroes among us,” said Kevin Donovan, 4th of July Association president. This year’s Grand Marshals are former Arlington Police Officer Boyce Megason and retired Gen. Willard Latham, both Korean War veterans.

Be sure to arrive early! Each year, tens of thousands of people line the streets to watch the colorful floats, antique cars, marching bands, unicyclists and other parade entries wind through Downtown.
“The one thing that really gets me about the parade is it’s the one true community event that everybody in Arlington can participate in,” said Donovan, who has been involved in Arlington’s popular Independence Day parade since 1997.

“It’s an opportunity for the community to come out and show its patriotic spirit,” Donovan added.
This year’s two-mile parade route, which begins at West and Mitchell streets, has changed slightly from years past because of the transformative Abram Street Rebuild Project. The main judges’ reviewing stand and the Arlington Community Band will move from their usual spot in front of Arlington City Hall south to College Park Center on the University of Texas at Arlington campus.
Following the parade, the awards ceremony will be held at 1 p.m. at Knapp Heritage Park, 201 W. Front St.

Click here for more information about this year’s parade. 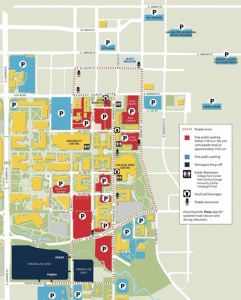 By The City’s Office of Communication