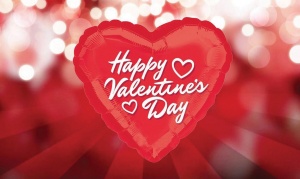 Michael Oliver and Valentine’s Day is a volatile mix.
He doesn’t like it.
It doesn’t like him.
So he says. So he believes.

“Most of my girlfriends are thinking about Valentine’s Day in January,” Brittany says. “I don’t want to be one of those girls who bug guys about getting them something for Valentine’s Day just because it’s Valentine’s Day, but what they do on that day wouldn’t be such a chore if they loved the person they are with and want to see them happy.”

Jessica Seward said pretty much the same thing. She’s been married for four years to Leone, whom she says has gotten better “with the whole romantic thing.” “I really do think that he knows the day isn’t really for him,” she says, laughing. “Once he got that, he became better on Valentine’s Day. Last year it was on a Tuesday, I think, and he got me some flowers. But on that Friday he surprised me with a really romantic dinner at a restaurant I really like and he wrote me this poem, which he never, ever does. He was sooooo romantic, I nearly cried.”

What women said on this less-than-scientific sampling of Valentine’s Day attitudes almost sounds biblical: For where your treasure is, there will your heart be also. “You love me, you want to see me happy. You want to see me happy, you acknowledge the day in some romantic way,” says Michelle Tobin, who is 20 and a college student. Her two friends nod yes. “We don’t want it to sound like we’re all trying to get gifts or something on Feb. 14,” says Michelle’s friend, Patrice, also 20 and a college student. “But if you really cared about me, you will just want to say that on the day set aside to say that. Now that doesn’t mean that’s the only day. But it’s a special day. I mean, c’mon, it’s ONE DAY a year.” Valentine’s Day isn’t rocket science. Just another day to celebrate. You’re either in or out.

Michael, for the time being, is out. Too bad. Relationships over time settle into a sense of sameness, although that’s not particularly a bad thing. Particularly when that sameness is based on respect, friendship, compromise, trust, communication. Perhaps Michael learned that he and his significant other had none of the above. So he’ll move on. One thing about Valentine’s Day, for better or worse: it just keeps coming.