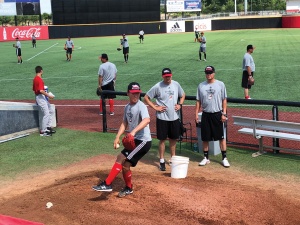 The Chinese National team has added some fireworks to the Texas AirHogs’ season – and made baseball history in the process. The Chinese are the first national team to play professional baseball in the United States. And they have given the Grand Prairie squad some new fans, new coaches and international flavor.

“This is what independent baseball is all about,” says J.T. Onyett, the AirHogs general manager. “It’s never been done before.”

The AirHogs, members of the American Association of Independent Professional Baseball League, partnered with Shougang Sports to import the 30 players – 20 who will rotate in and out of the lineup, while the other 10 will work out with the team to gain experience.

“I bet all these kids have not played more than two times a week,” says John McLaren, the team’s manager.

“Now they’re playing six times a week and being introduced to a lot of things.”

McLaren, 66, a Houston native who managed the Seattle Mariners, coached Team China in the World Baseball Classic in 2013 and 2017. He and his staff were brought in to lead the AirHogs and prepare the Chinese players for a shot at the 2020 Olympics.

“Our expectations are very simple – get better every day,” McLaren says. “They don’t have TV, they don’t show baseball, they don’t have Little League, they’re not introduced to the game, sometimes not until high school. That’s where we’re challenged. We have to come out of the box. That’s one of the reasons we’ve come here.”

“Chinese is one of those things you have to plan to learn,” says AirHogs outfielder Dillon Thomas, 25, of Houston. “You learn ways to communicate. You learn hand signals.” Coaches and team members also work with interpreters to make a game plan. “When you’re running for balls, and they say ‘I got it,’ it doesn’t sound the same,” Thomas says. “You get together before and say, ‘Unless you’re calling the ball, don’t say anything. If I hear anything, I’m going to stop running.’”

Then there’s the difference in how Chinese and Americans play the game. “They can play,” says Thomas, who played with the Colorado Rockies AAA team before being injured. “I think they have a lot to learn about how Americans play. Asian people are not as big and as strong. American players are more power-based, and [Chinese players] are more based on skill.”

Liu Yu, 26, a starting pitcher for the AirHogs, agrees.

“Americans are good at baseball, just like the Chinese are good at ping pong,” says Liu, who also pitches for the Beijing Tigers and the Chinese National team. “To play in the American major leagues is a dream for every Chinese player.”

The partnership benefits the Chinese and the AirHogs, Onyett contends. “The Chinese players are trying to get better,” he says. “For us, we’re looking for different ways to do things.”

And it seems to be working. The AirHogs led the league in attendance the first week of the season, Onyett says, after several Asian groups came out to show their support.

“We wake up every day and just think about baseball,” Onyett says. “Just like all minor league teams, we’re fun, family-friendly and affordable. The best seat in the house is $12.”

AirHogs Stadium is at 1600 Lone Star Parkway in Grand Prairie. For more, go to airhogsbaseball.com.