NFL Draft is coming to town this month 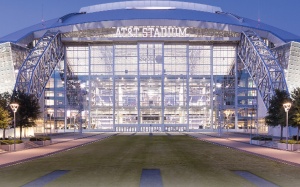 If you thought the National Football League was just an autumn pastime, think again. This month – specifically from April 26-28 – the NFL’s second-biggest event, the player draft, will be held at AT&T Stadium before what will likely be the largest crowd ever to witness the league’s selection process.

How big will this year’s draft be? In late February, more than 100,000 fans had signed up for a chance to view the event. That’s the highest number of registrations over a three-day period in draft history.

Fans who registered at NFL.com/FanMobilePass were entered into a free lottery to win seated tickets inside the NFL Draft Theater at the Stadium.

Those lucky enough to get seats will be party to a three-day process that can help teams’ prospects for improvement over the coming season and years. One example of the kind of boon a smart selection can represent is Philadelphia Eagle quarterback Carson Wentz, taken with the first selection in the 2016 draft. Last year, he helped put the Eagles into a contending position before being injured late in the season, and then watched as his team claimed the championship a few weeks later.

The Dallas Cowboys are the first NFL team to host a draft from a stadium.

Arlington is making the event a “team sport,” as residents, police, utilities and the fire department have been planning for more than a year to make the draft a seamless success. Off-duty Arlington police officers will work the event. The department will work with city and Arlington Police engineers to come up with traffic plans to handle the demand on infrastructure, as well as use social media and other communication methods with the road navigation application Waze and event coordinators to communicate to attendees where to go.