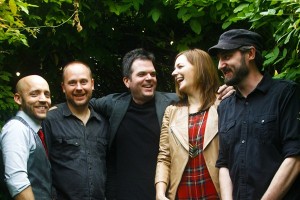 No one could believe it when we heard The Killdares plan to retire at the end of 2016. As soon as we heard the news, we knew we had to have them perform at the Levitt one more time. Since they got their start in 1996, The Killdares grew to be known as one of the hottest, cutting edge bands in music — Celtic or otherwise. World-class musicians from all over the United States, they came together in Texas to create and perform a new version of hard-driving, alternative Celtic rock music. Blending traditional Celtic playing skills, power-pop accessibility, and straight up rock ‘n’ roll hooks, The Killdares created a fresh new sound that was always engaging and appealing to fans of all ages. Even die-hard fans of purely traditional Celtic music  embraced the band’s powerful genre-bending sound using the unconventional pairing of screaming, fire-driven fiddle and bagpipes with the wail of electric guitar, bass and drums to create brilliant arrangements of traditional tunes and original compositions. Their distinctive sound combined with the band’s incredible stage presence is nothing short of awesome. Don’t miss one of their last concerts and the chance to hear them live!