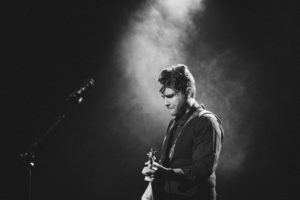 Luke Wade’s free concert is part of North Texas Giving Day, an annual online fundraising event. Eligible Arlington nonprofits will be attending. There will be a People’s Choice Award given away at the event, and the winner will receive $5,000 from the Arlington Tomorrow Foundation.

Luke Wade makes a return visit to the Levitt for a special Arlington Gives!/North Texas Giving Day concert. Luke’s hometown fans were not surprised when he landed in the top five finalists on the seventh season of NBC’s The Voice, where he was part of Team Pharrell. That’s a long way from growing up in Dublin, a sultry little Texas town known for being the home of sugar cane Dr Pepper. The youngest of four children, his insightful and thoughtful lyrics were inspired by his parents. Last year’s release of The River and a swell of media coverage have surrounded Luke since his appearance on The Voice. Luke surrounds himself with exceptional musicians and remains keenly aware as to his place in the musical equation. Luke’s songwriting is honest and never self-indulgent, creating music that feels as much a part of the listener as the artist with a charm that has endeared him to his audience and encouraged a rabid following wherever he performs.