by ArlingtonToday Magazine
in Business and Education, Community, Featured
0 0
0 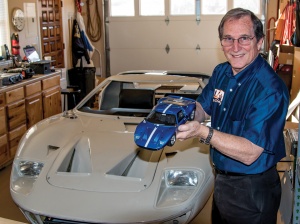 Three and a half years ago we featured Dr. Bob Woods at work in his home garage where he had started building the car of his dreams. “I can’t believe I’ve actually built a car from scratch … by myself,” he says, smiling while looking over his rather remarkable achievement.

That’s a very interesting thing for UT Arlington’s Distinguished Teaching Professor in mechanical engineering to say, as he has mentored his students in constructing from scratch some 35 Formula SAE racecars over his 44-year career at the university. 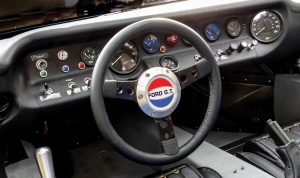 But, this fabricated replica of Ford’s 1966 GT40 that won the world’s most prestigious endurance race at Le Mans, France, four years in a row is very unlike anything else in his long career.

Describing his personal experience with the metallic Guardsman Blue, head-turning beauty, he reflects on the time it has taken to finish his project: “When you consider it day-by-day, it doesn’t seem like much, but looking back, it’s really quite a lot.”

That may be a major understatement when considering the results. What he now has is a 2200-pound, 500-plus horsepower race car capable of speeds exceeding 200 miles per hour.

“I’ve not driven it that fast,” he says when asked what it’s like at that speed. “Too many things could blow off the car, and the doors might lift up.”

Listening to the full-throated sound the unique engine makes with the “bundle of snakes” exhaust system, it’s easy to imagine just how Ford succeeded in putting the previous perennial winning Ferraris in the rear-view mirror at Le Mans. 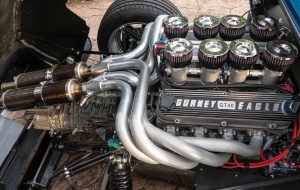 He describes some of the engineering: “There are two 4-into-1 collectors that take pipes from both sides of the engine according to the firing order. This produces the most wonderful exhaust note. I used the D&D ‘Bobcat’ motorcycle mufflers (that I actually designed and are named after me). That muffler increases power and makes a good sound on big bore Harleys.”

The GT stands for Grand Touring, and the 40 represents the car’s overall height of 40 inches – getting in and out requires some dexterity and is especially challenging to really big guys.

He cites his relationship with the late Carroll Smith, who was the design engineer on the ’66 GT, for his motivation. “He was my best buddy, and I owed it to him to build this replica.”

The interior of the car is also special – sort of a mix between minimalists dials and switches of racecars across the spectrum of the sport and a very sophisticated arrangement of all the controls surrounded by a rich leather finish. 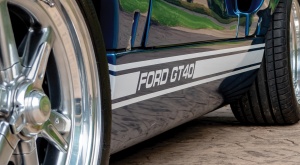 The car is so low that the driver and passenger actually sit on the floor. Getting in and out is aided by the cutouts in the roof. You have to step over the gas tanks located in the side sills.

It’s all a little daunting when you try it for the first time, but once behind the wheel you realize you’ve just encountered a singular experience.

Woods founded the UT Arlington SAE student racing program in 1982. The team has won eight championships in the United States and international titles in England, Japan and Australia.

The UTA team was invited back for the 20th anniversary of the event in July. Bob eagerly accepted and promised to bring the winning car back for the celebration along with the car’s original drivers to be part of the show.

They finished eighth among 100 entries in the competition with the latest, even more hydraulically actuated version of their craft. 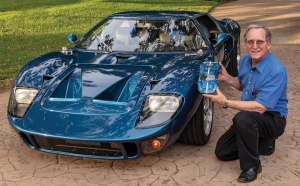 The success of the SAE racing program has put UT Arlington in the national spotlight and provided President Vistasp Karbhari with bragging rights for winning on the racetrack, as well as preparing engineering graduates for successful careers.

Bob’s most recent honor came through a gift from entrepreneur and businessman Paul E. Andrews, Jr., establishing an endowed chair in Bob’s name to promote research, innovation and development of best practices in automotive engineering and design.

On an even more personal level, he can be forgiven for exuding enormous pride in his years-long achievement of building something of amazing beauty now being shared with others wherever he takes it.