First a Dream, then a Book

by ArlingtonToday Magazine
in People
0 0
0 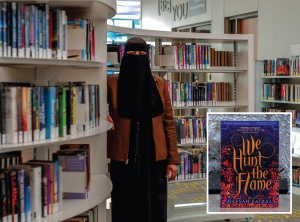 Open the book and step into a world inspired by ancient Arabia. Zafira, a disguised huntress, seeks a lost artifact on an island that might kill her – unless the crown prince, Nasir, does first.

That is the premise of “We Hunt the Flame,” a Young Adult fantasy novel written by Arlington resident Hafsah Faizal. Even hot off the press, it is creating buzz and receiving rave reviews in literary circles.

“The original idea for ‘We Hunt the Flame’ was sparked by the question: What if the Hunger Games was merged with The Lord of the Rings?” says Faizal. “Since then, the story has gone through many iterations, stripping free from the ways in which it could have been compared to either novel, though the influences are still present for those who look hard enough.”

Faizal started writing manuscripts in her late teens. Shortly afterward, she created her own blog, thanks to the Arlington Public Library.

“I stumbled on the library’s teen blog (which no longer exists), run by two youth librarians (Amy Georgopoulos and Jenny Ethington), by accident one day,” she says. “They had an ongoing contest where readers could submit a book review and receive a free book in return. I’d do this once a month, and along with the books I checked out every few weeks, it just wasn’t enough.

“The librarians then introduced me to a niche in publishing where other teens like me ran blogs of their own, sharing their love for books, interacting with authors and publishers – and soon enough, I had a blog of my own. It was like stepping through a portal into a magical world filled with books, and I just knew I had to be a part of it!”

And part of it she is!

Faizal started as a blogger in 2010. She soon gained an audience as an influential member of the Young Adult community. In addition to talking up books, she was constantly altering her blog’s look, which led to others asking if she could design layouts for them.

IceyDesigns began as a web design service, but it became even more.

“In 2015, it expanded to an online storefront selling hand-lettered journals, candles and other inspirational and literature-themed goodies,” says Faizal. “I’m the owner of the business, with several employees.”

Though she has found success in her creative abilities, Faizal did not go to school for writing or design. She is self taught. And she is proud of her accomplishments.

“I think I’m most proud of how the book turned out – editing is such a daunting process, and it feels like a horrible mess when you’re tearing things apart and bringing it all together. But the end result is beautiful.”

“We Hunt the Flame” is Faizal’s fifth manuscript. It is her first published book. It is available on amazon.com.